Yes, Barack Obama could buy the Suns...sort of: Former president floated as potential next NBA owner

Yes, Barack Obama could buy the Suns...sort of: Former president floated as potential next NBA owner 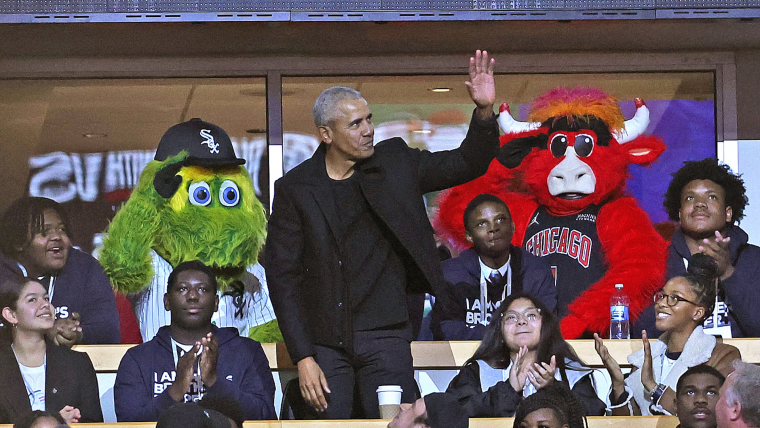 That was the rumor floated by Bill Simmons on his latest podcast with Charles Barkley. And although it seems crazy on the surface, it’s not that far-fetched when you break it down using historical precedent.

What started as a conversation with Barkley about his future and potential interest in owning part of the Suns dovetailed into a fascinating ‘what if’ that’s part reporting and part rumor mill.

“The days of somebody being able to put in a little bit of money and run the team, those days are over. That was a moment. The one guy who might pull it off, and I’m probably breaking some news here, but I heard Obama is involved in one of the groups and that’s the one guy I feel like they would make him the actual face and the money guys would be so happy to have him at the front.”

Barkley took the bait and was quick to enthusiastically interject. “Timeout. If Obama called me, hell yeah I’m buying in!”

OK so let’s take this at face value and unpack how it could actually happen.

How much are the Suns worth?

Spoiler alert: It takes a lot of money to buy an NBA team.

According to last year’s annual report by Forbes, the Suns are worth approximately $1.8 billion dollars, ranking 18th on the list of most valuable NBA franchises.

And yet most expect the Suns to go for far more than that given the rise in NBA valuations and the upcoming new media deal in 2025. Early reports indicate the NBA is seeking a $75 billion dollar package that would triple the current record-breaking deal signed in 2016 for nine years and $24 billion.

The last two franchises to hit the market — the Jazz and Timberwolves — went for $1.6 and $1.5 billion, respectively. Prior to that, the Nets, Clippers and Rockets all fetched deals north of $2 billion.

MORE: How much will Robert Sarver profit from Suns sale?

Reports are all over the map about how much embattled owner Robert Sarver will fetch for the franchise, which also includes controlling interest of the WNBA’s Phoenix Mercury. Current reports project the sale to be anywhere from $3 billion to $5 billion.

Let’s split the difference and assume a $4 billion price point. Could Obama really fork over enough cash to get a deal done?

The former president is loaded but he’s not made of money, especially when compared to your typical NBA owner.

According to Celebrity Net Worth, Obama is currently worth about $70 million. In addition to his lifetime $400K annual salary as a U.S. president, the Obamas attribute most of his net worth to proceeds from book deals and speaking engagements.

They landed a reported $65 million advance back in 2017 with Penguin Random House for the rights to two memoirs and he currently commands a $400K fee for speaking engagements.

Logic then dictates that while Obama is certainly wealthy, he’s nowhere remotely rich enough to buy an NBA team… or is he?

Follow the example set by Michael Jordan with Hornets

Look no further than Michael Jordan’s purchase of the Charlotte Hornets — then the Bobcats — back in 2010 for a reported $275 million, including $180 million in cash plus an assumption of outstanding debt.

But while that final price tag still vastly exceeds Obama’s net worth — not to mention soaring NBA valuations since that deal went down — as always, the devil is in the details.

What if Obama purchased a minority stake as part of an ownership group with a key Jordan-esque wrinkle?

Four years before becoming the principal owner and purchasing the majority stake from original owner Bob Johnson, Jordan entered the ring as a minority investor but with the final say over all basketball decisions. Assuming a front-facing role with the veto power on all roster decisions and player personnel essentially gave Jordan control of the franchise as he pulled the strings on everything impacting the on-court product.

Could Obama enter the fray in a similar capacity? And why would a majority owner agree to such a deal?

The former president harbors significant influence over the NBA’s key decision makers. Look no further than 2020 when a phone call from Obama to LeBron James and Chris Paul helped save the season in the bubble following the wake of George Floyd’s murder and ensuing nationwide protests.

Given his role as a prominent NBA role model, having Obama in the fold would certainly be a draw for marquee stars. And given the impact of star players on franchise valuations — see LeBron James in Cleveland or Giannis Antetokounmpo in Milwaukee — handing the keys to Obama as a means to drive up the Suns' value could be seen as a shrewd business decision.

So while Obama might not have the means to buy an NBA team as the majority owner, there’s certainly a financial case to be made Obama has more than enough juice to become the most powerful figure in whoever ultimately buys the Suns.