Why was Bubba Wallace suspended? NASCAR driver out for Miami race after crash, confrontation with Kyle Larson

Why was Bubba Wallace suspended? NASCAR driver out for Miami race after crash, confrontation with Kyle Larson 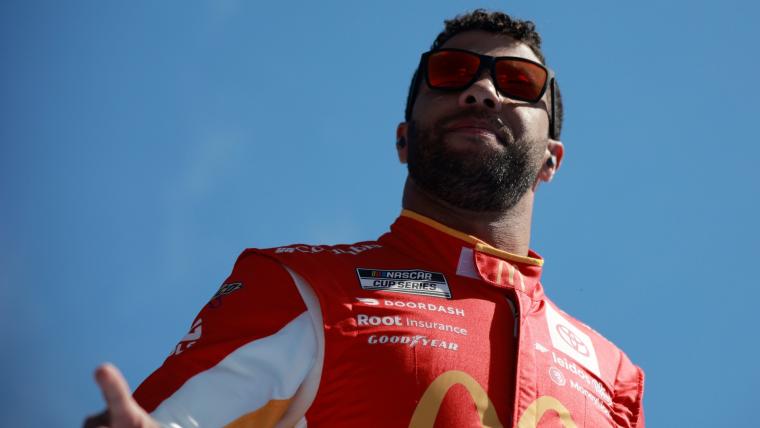 The 23XI Racing driver received a one-race ban for his antics during last weekend’s playoff race at Las Vegas.

Wallace got into a heated altercation with Hendrick Motorsports racer Kyle Larson after Larson bumped into Wallace’s No. 45 car during Stage 2 of last week’s race.

Wallace, who won Stage 1 of the race, proceeded to run Larson off the track, veering into him and sending his car into the track infield. Larson narrowly avoided a severe collision with Joe Gibbs Racing’s Christopher Bell, a Round of 8 driver who was knocked out of Sunday’s race on account of the Larson-Wallace wreck.

Here’s the latest on Wallace’s suspension.

Why is Bubba Wallace not racing this week?

NASCAR handed Wallace a one-race suspension for his wreck and confrontation with Larson, per Bob Pockrass. Interestingly enough, Wallace will not be docked any points nor incur any fines as a result of the suspension.

The incident took place just 14 laps in Stage 2. Wallace, who had been running near the top of the pack for much of the race, was seemingly left frustrated after Larson sent his car into the wall. Wallace returned the favor, giving Larson a slight bump to send him toward the infield.

Wallace then appeared to give Larson a “right hook”, clipping into the side of his No. 5 car, which sent him spinning across the middle of the track.

Wallace spins him out, and #NASCARPlayoffs driver Christopher Bell is involved! pic.twitter.com/TlxcEV5T6q

Larson only narrowly missed out on a major wreck with Bell, but all three racers suffered enough damage to be knocked out of Sunday’s race.

Wallace then stormed down the infield and got into a heated altercation with Larson, shoving him several times before the two were separated by an on-track official.

Bubba Wallace is NOT HAPPY with Kyle Larson.

Some pushes and shoves after they wreck. #NASCAR pic.twitter.com/aaAn0idrJp

In the immediate aftermath of the wreck, Wallace was adamant that he didn’t make a retaliatory move on Larson. He told NBC’s Marty Snider that he was simply responding to Larson’s attempt to make a three-car dive bomb without his approval.

MORE: Round of 8 drivers after the Charlotte cutoff race

Hear from @BubbaWallace after his incident with Kyle Larson. #NASCAR pic.twitter.com/XUMPs2sRsf

Larson had a different view on the situation, telling Snider that while Wallace had a right to be frustrated with his move, the 23XI Racing driver made a reckless move — particularly given the conversations surrounding head injuries in the sporting world in recent weeks.

'@KyleLarsonRacin addressed Bubba Wallace's move and if he thinks it was retaliation. #NASCAR pic.twitter.com/sDVDXJTDxU

Nevertheless, Wallace put out a public apology statement on Monday. In it, not only did he apologize to his team’s corporate sponsors, but also Bell himself.

Bell, who now sits 23 points adrift of a spot in the Championship Round of 4, confirmed that Wallace apologized to him and his team in person. The two shared a flight home with one another after Sunday’s race, per Bell.

Christopher Bell said Bubba Wallace apologized to him on the plane Sunday and at the JGR competition meeting Monday. pic.twitter.com/1BEA06ivKw

Wallace will miss out on Sunday’s race as a result of his actions. However, some, including former Cup Series veteran and current NBC racing analyst Kyle Petty, believed Wallace should have received a harsher punishment.

Joey Logano, who sealed his spot in the Championship Round of 4 with a win as Las Vegas, shared his thoughts on the matter on SIRIUS XM Radio on Tuesday.

“If he spun him to the infield, maybe it’s a little better, but right-rear hooking someone in the dogleg is not OK. I don’t know if everyone realizes how bad that could have been,” Logano said, per ESPN’s Ryan McGee. “That could have been the end of Kyle Larson’s career. That to me was what was on the line. Or his life. That is the worst spot to get right-rear hooked into a corner.”

[Larson] might have flush-hit that thing in the side and game over. There’s no room for that. You can’t do that. If it’s under caution and you’re banging doors … I don’t know that that’s OK, but at least you’re not putting someone’s life at risk. I don’t like using cars for a weapon. Just get out and fight him. That’s fine if that’s what you really want to do and that’s how you want to handle it.

Intentionally hooking people in the RR should never be acceptable. Protect us from ourselves. I hope this is the beginning of the end of it happening.. https://t.co/fRXYnifgbw

Nonetheless, NASCAR fans won’t get a chance to see Wallace until the Xfinity 500 at Martinsville.