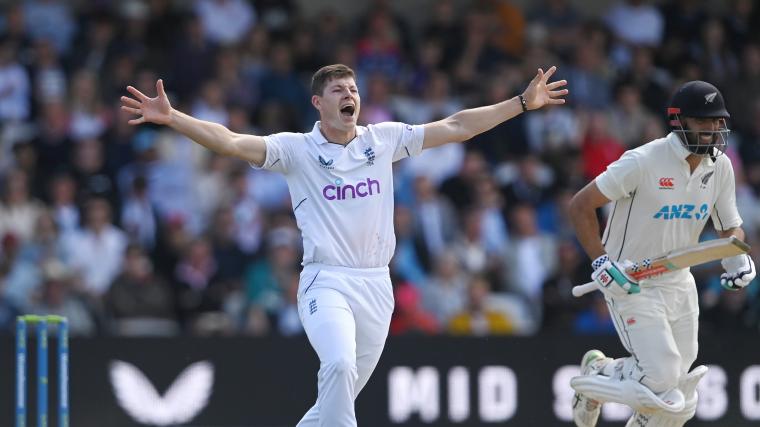 HEADINGLEY, LEEDS — Fans of a rejuvenated England team were able to celebrate the exploits of familiar heroes as the afternoon became evening on day four of the 3rd Test against New Zealand.

Jack Leach blocked as Ben Stokes bludgeoned to take down Australia on this ground three years ago, but the left-arm spinner thrived in his primary role this time around.

Leach bowled with control that has often eluded him during his Test career, ensuring lengthy partnerships between Tom Latham and Kane Williamson and then Daryl Mitchell and Tom Blundell never got away from England. Feasting on the Black Caps tail was his reward. A return of 5/66 was his second five-for of the game and meant a maiden 10-wicket match haul in the longest format.

Despite the early losses of Alex Lees and Zak Crawley, Joe Root played with a luxuriant fluency alongside Ollie Pope to delight his home crowd, never more so than when he implausibly reverse scooped Neil Wagner for six.

But England closing on 183/2 in rapid pursuit of 296 for victory was only possible because of a breakout star who prised the door open at the very point Mitchell and Blundell looked like they might have changed the locks. At just 23, Matthew Potts looks like he was born to be a Test match fast bowler.

Did Matthew Potts play for England in the Test series against West Indies?

The story of Potts’ rapid rise begins in March 2022, when it didn’t actually begin at all.

England sparked reactions that tended to range between outrage and perplexion by leaving James Anderson and Stuart Broad out of their squad to play a three-match series against West Indies, as part of the ill-fated red-ball test.

The closest Potts got to a revamped line-up, which was already without Jofra Archer, Mark Wood, Ollie Robinson, Sam Curran and Olly Stone through injury, was to be put on standby at home. Matthew Fisher and Saqib Mahmood made their Test debuts in a 1-0 series defeat that heralded the end of Root’s captaincy.

Why was Matthew Potts picked to play in the Test matches against New Zealand?

Wood is now also sidelined after elbow surgery, while Fisher and Mahmood have joined Archer, Curran and Stone in being struck down by stress fractures to the back.

Those unfortunate circumstances and England’s change of leadership combined to create an opportunity for Potts. Freshly appointed Test skipper Stokes went back to Durham to play the early season rounds of the County Championship and found a young seamer making waves.

In six matches, Potts took 35 wickets at an average of 18.57, with best figures of 7/40. He suddenly looked like a perfect fit for England’s new era in the longest format under Stokes and head coach Brendon McCullum.

How many wickets has Matthew Potts taken in the England vs New Zealand Test series?

As introductions to Test cricket go, dismissing one of the best players in the world in your first over at Lord’s is pretty hard to top.

That’s exactly what Potts did in the opening game of the series, having Kane Williamson caught behind. Impressively, things have continued in more or less the same vein.

New Zealand captain Williamson has fallen three times to Potts in his four innings, while the 23-year-old has 14 wickets overall at 23.28.

All that said, young quick bowlers bursting onto the scene with a cluster of wickets against batters who don’t know too much about them isn’t an entirely rare occurrence.

Where Potts has given the clearest indication of a long-term future at the highest level is the manner in which he has thrived when having extra responsibility thrust upon him in Leeds this week.

Why isn’t James Anderson playing in England vs New Zealand at Headingley?

The answer isn’t “because he’s from Lancashire and he hates Yorkshire”. The reality is more mundane. Anderson, England’s veteran all-time leading wicket-taker has an ankle niggle and was not risked with next week’s encounter against India at Edgbaston on the horizon.

Anderson and Broad have 1,200 Test wickets between them. Bowling first-change after two masters of their craft is a pretty nice gig. Being asked to fill in for your country’s greatest ever bowler is a little more daunting.

That was the brief given to Potts at Headingley as Jamie Overton came in as the X-factor option in the attack. Alongside Broad, Potts would be charged with relentlessly hitting his lines and lengths and suffocating New Zealand’s batters of the oxygen of easy runs.

He did so impeccably in both innings. After the Black Caps won the toss and elected to bat, Potts took the new ball and proceeded to send down 26 overs for figures of 1/34 with 11 maidens. That amounted to a miserly economy rate of 1.3 runs per over. No England seamer who has bowled 20 or more overs in an innings this century has been so frugal.

His second-innings 3/66 featured the vital fourth-afternoon wicket of the in-form Mitchell, which created the opening for Leach to make merry.

“We stuck at it well and I thought Pottsy bowled really well, just kept going and kept going. He probably deserved five wickets,” the spinner said afterwards, acknowledging his debt to the youngster

How fast does Matthew Potts bowl?

For all the crash-bang excitement of the fledgling McCullum-Stokes era, Potts doesn’t really tick that box stylistically. While Overton came into the team as a man noted for being able to touch 90 mph, Broad’s latest new-ball partner resides around the low-to-mid 80mph range.

A strong, repeatable action means he still gets the ball through quick enough to make batters know they are in a scrap. Potts’ real strengths lie in his unerring accuracy — especially in the channel outside off-stump to right-handers — and an ability to swing the ball both ways.

Blundell enjoyed more success than most in Potts’ game-shifting eight-over stint on Sunday, finishing on 88 not out, but the New Zealand wicketkeeper-batter knew he had been in an elite-level contest.

“It was a good battle. I think that spell was a serious spell of bowling, even with that old ball," he said.

“Having the ability to move the ball both ways off the strings… it was pretty impressive, to be honest.

“It felt like you had to be ‘on’. I thought he bowled bloody well.”

All the evidence suggests Blundell will have plenty more international players to share Matthew Potts war stories with over the coming months and years.