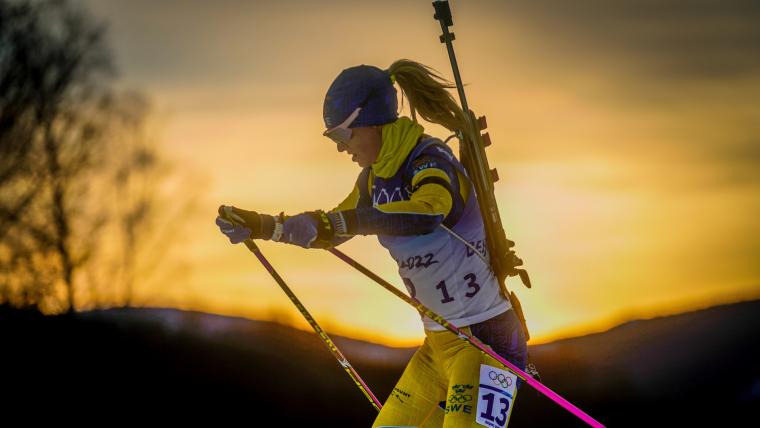 Perhaps no other sport at the 2022 Winter Olympics features more incongruous components than the biathlon: one part cross-country skiing, one part rifle shooting.

Unlike other cross-country events, the addition of a shooting element creates a more even playing field. Racers who charge to the front of the pack can lose their lead with misfires during the shooting portion of the competition. Likewise, stragglers can make significant gains on leaders if they accurately hit their targets.

It’s a sport North Americans have had little success with, as it has been dominated by countries such as Norway, Denmark, Sweden, France, Germany and Russia (now competing as the ROC). But what exactly is the reason for mixing cross-country skiing and shooting?

The Sporting News has the answer, including the origin, Olympic history, medal counts and rules for modern iterations:

Why is shooting part of the biathlon?

According to Encyclopedia Britannica, the biathlon “is rooted in the skiing traditions of Scandinavia, where early inhabitants revered the Norse god Ullr as both the ski god and the hunting god."

Those traditions manifested in the 18th century as alternative training for military forces. Skiing contests were divided into four classes: shooting at a mark while skiing at top speed, downhill racing, downhill racing among trees and long races on flat ground while carrying rifles and military packs. Biathlon is among the modern iterations of those military training exercises.

How far is the shot in the biathlon?

Most races require Olympians to shoot from both the standing and prone positions and they must carry their rifles with them the entire time.

How long has biathlon been an Olympic sport?

Biathlon was recognized as an Olympic sport in the first Winter Games of 1924. It was again contested in 1928, but was only contested twice over the next five Olympic Games, in 1936 and ‘48.

It was officially re-accepted as an Olympic sport in 1955, but was not held at the following year’s games. It has been contested every year from the 1960 Games — in Squaw Valley, Calif. — onward. In all, it has been part of 21 of the 24 Winter Olympic Games.

Modern biathlon rules– What kind of rifle is used/rifle caliber?

The modern biathlon features several different variations, including distances traveled, starting procedures, number of shooting stages and penalties. Regardless, the aim in all iterations is to perform the cross-country portion of the race in as fast a time as possible while completing periodic shooting portions as quickly — and accurately — as you can.

Modern rules dictate biathletes carry a .22-caliber rifle on their backs (previously, higher-powered cartridges were used before .22 rifles were standardized in 1978). The rifle is to weigh 3.5 kilograms, or 7.7 pounds.

One rule that varies the most is the penalty incurred for missed targets during the shooting element of the biathlon. The following penalties are incurred, depending on the competition:

Biathlon events at the 2022 Winter Olympics

The 2022 Winter Olympics in Beijing feature 11 biathlon events: five men’s events, five women’s events and one mixed relay. They are as follows:

The 10-kilometer sprint (7.5 for women) is a time trial run over three laps. Biathletes stop twice and shoot at five targets — one standing and another in the prone position — with five cartridges for each station. Athletes take a penalty lap for each missed target. The fastest time through the course wins.

The start for the pursuit race (12.5 kilometers for men, 10 for women) is determined by the finishers of the sprint. The top 60 competitors from that event qualify for the race, with start times staggering based on the leaderboard. (A higher finish and better time in the sprint grants a more advantageous start in the pursuit — hence later starters “pursuing” the leader.)

Unlike other biathlon events, competitors all start at the same time in the mass start — as opposed to competing against each other in separate time trials — and race 15 kilometers (12.5 for women).

Like the pursuit event, the top 30 biathletes from the previous events qualify for the mass start. Starting numbers are determined based on previous events’ results and biathlon World Cup standings. Also like pursuit, the mass start has four target ranges with five cartridges for five targets at each station. Missed targets incur 150-meter penalty loops.

Relay teams consist of four skiers each, with each team’s lead-off skier starting at the same time before tagging the next athlete in the “hand-over zone.” Athletes must travel 7.5 kilometers each (6 for women), shooting at two stations each.

Unlike other events, each athlete gets three extra bullets per station. While those bullets could save on penalty laps, they must be loaded into the gun individually. Apart from that, the rules remain the same, with athletes incurring a penalty lap for each missed target.

The mixed relay will see the two women of the team complete the first and second portions of the race before the men complete the third and fourth portions. It otherwise follows the rules of a regular relay.

The individual is the only biathlon event that does not feature penalty laps. Instead, every missed target adds an additional minute of time to athletes’ finishes. Skiers must stop at four five-target stations along the 20-kilometer course (15 for women).

Below is a rundown of the top 10 medaling countries in the biathlon as of the completion of the 2018 Winter Olympics in Pyeongchang, South Korea.

Countries are listed in descending order by number of total medals.