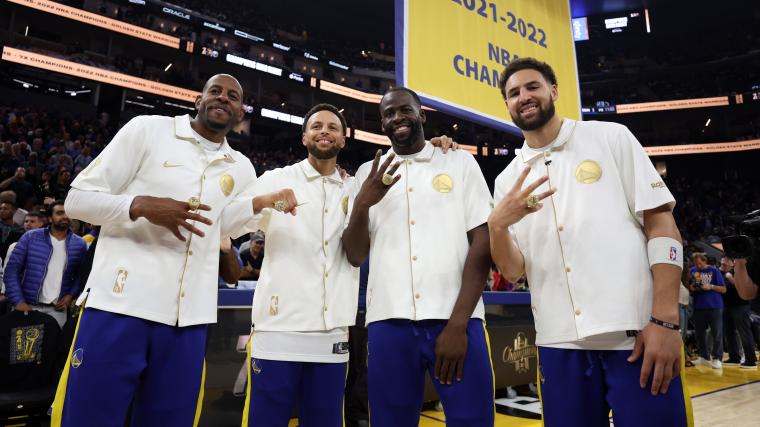 The Golden State Warriors are done being humble. After winning their fourth NBA title in eight years, their 2021-22 championship rings are reflective of their core’s attitude: They’re the team to beat, and they know it.

The Warriors had their ring ceremony on NBA Opening Night against the Lakers at home, where they received the gaudy new jewelry. The 16-carat rings, as these rings always are, are loaded with symbolism — starting with the carat count. 16 is representative of the 16 wins it took for the Warriors to win their seventh NBA championship.

They’re also customized for each player, and according to ESPN, they’re designed to be ostentatious. Per Kendra Andrews, a text to jeweler Jason Arasheben read: “Make sure it’s over the top.”

The first thing that jumps out here is the emphasis on individual Larry O’Brien Trophies, rather than the Warriors' seven. Although teams usually celebrate every championship, the Warriors are honoring their current core, including the league’s eminent star Stephen Curry.

Beyond the obvious, here’s a look at some of the other symbolism packed into these rings.

To start, the rings' designs are modeled after the Warriors' home, the Chase Center. The arena’s exterior can be seen around the outside of the ring, much like the 2015 rings' resemblance Oracle Arena. There’s also a view of the interior of the arena down the side.

Much like the aforementioned 16 carats, the inner area of the ring has 0.91 carats of white diamonds. That’s to represent the 91 percent winning percentage for the Warriors at home, another homage to their home-court advantage.

The Warriors used yellow diamonds to make up the primary face of the ring, the first time that’s been done for a championship ring, per the Warriors website. There are seven carats to represent Golden State’s seven championships. The yellow is meant to represent the Warriors' “Gold-Blooded” slogan it used for much of last year’s postseason.

This is where the customization gets really interesting. There is a secret compartment in each player’s ring that opens to show how many championships each player as won. That is accessible through a lever on the ring.

The Warriors paid a bit more homage to Stephen Curry with the 43 white diamonds making up the Bay Bridge. That’s to highlight Curry’s 43-point performance in Game 4 of the Finals against the Celtics.

More than almost any other ring in recent memory, beauty is in the eye of the beholder for these Celtics. These rings are so customized, it’s clear the Warriors want to honor every individual player. Like any logo or artist’s description, a lot of it is too nuanced to care about. But it certainly is fascinating to see just how “over the top” this Warriors team can truly go.