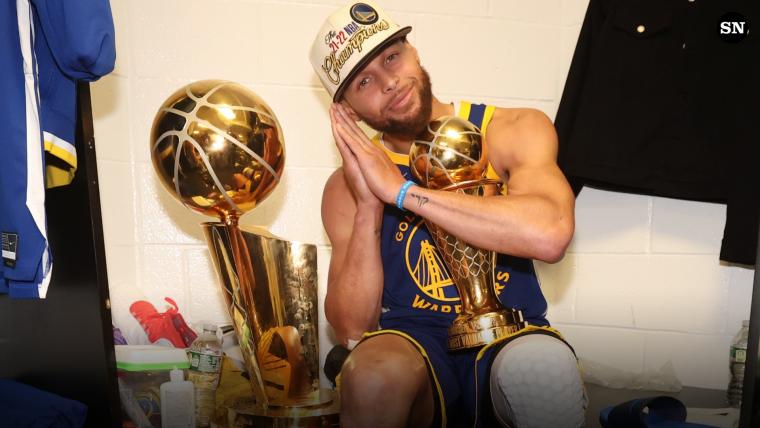 Stephen Curry changed the game of basketball with his long-distance shooting. Now, he may be changing the game of sports celebrations, too.

Curry famously pulled off his latest celebrating stunt in the NBA Finals, putting the kids to sleep with a dagger three-pointer late in the fourth quarter of Game 6. The Warriors held an insurmountable lead, Curry had sealed his campaign for a Finals MVP and the Bay was rocking.

So Curry did ‘Night Night’, resting his head on his clasped hands. It’s a move he pulled off in every other round of the playoffs this year.

And the move has swept around the sports world like wildfire in the past week. From the gridiron to the baseball diamond, it seems like athletes can’t get enough of Curry’s little jig.

But was Curry really the one to start the trend? Sporting News has you covered.

Where did Stephen Curry’s ‘Night Night’ celebration come from?

Curry is a trendsetter in more ways than one. From the way he chews on his mouthguard during free throws, to his shimmy shakes after big plays, the Warriors point guard has been known to start a revolution a time or two.

But the origins of the ‘Night Night’ celebration don’t appear to come from the sharpshooter from Davidson — at least not at first glance.

As numerous Twitter users pointed out, famed wrestler CM Punk pulled off the move regularly during the late 2000s. In fact, CM Punk made the gesture a featured element of one of his signature moves, the “Go To Sleep” finisher.

How did Stephen Curry’s “Night Night” celebration get started?

We still don’t know if Curry got the gesture from CM Punk. If you ask Curry, it was a spur of the moment thing.

“I have no idea. I don’t choreograph none of that stuff,” Curry said after Game 2 of the Western Conference Finals.

I was just having fun. You talk about having kids. You know how bedtime routines are important. It’s the final signal for job well done that day. Pretty special.

Here’s Curry hitting the move while appearing to say “Night, Night,” in that game, just for good measure.

The gesture has been a part of the sports world for at least a decade. It’s very likely that it’s been around even longer — I mean, which ballplayer hasn’t said “good night” after hitting a dramatic shot. Regardless of its origin, it’s clear that Curry popularized it and made it mainstream.

And the sports world has taken notice.

The first emulation came on the hardwood when New York Liberty guard Sabrina Ionescu pulled it out after hitting a Curry-esque logo three against the Dream on June 24.

Phoenix Mercury guard Skylar Diggins-Smith rested her head on her hands after hitting a dagger three, too, this time against the Dallas Wings on June 25.

It came to the diamond soon after. Brewers centerfielder Andrew McCutchen, a fellow former MVP, pulled it out after smacking a homer against the Blue Jays on June 25.

Cutch doubles it up.

And even some of the USFL’s players got in on the action. The Birmingham Stallions' Torrance Marable and J’Mar Smith hit the move after the Stallions vanquished the New Orleans Breakers.

Curry might have not created the “Night Night” move, but he certainly helped spark the latest trend.

The question is… who does it next?