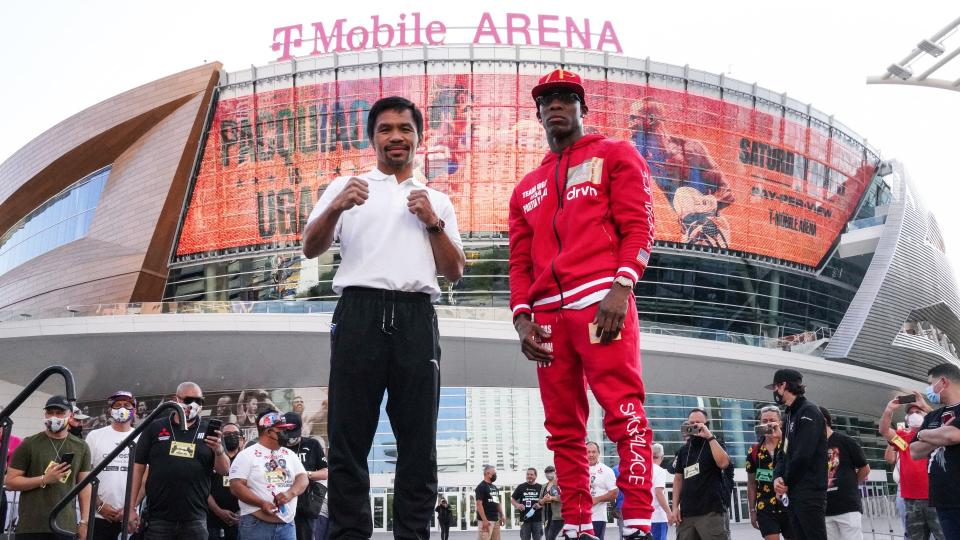 Manny Pacquiao will challenge Yordenis Ugas for the WBA (Super) Welterweight championship at T-Mobile Arena in Las Vegas on August 21.

The two were paired when Pacquiao’s original opponent, WBC and IBF champion Errol Spence Jr., was forced out of the fight due to an eye injury. Ugas' was already slated to fight in the co-main event but his opponent also suffered an injury and was removed from the card. With both needing opponents on short notice, they have turned to each other as Pacquiao will look to become a world champion again while Ugas ends up in the biggest fight of his professional career.

It’s not ideal circumstances for either fighter, but the show must go on. And because of that, the betting lines offer a great deal of intrigue.

Sporting News provides the current odds and offers some insight on how to bet on Pacquiao-Ugas.

Manny Pacquiao being such a significant favorite in a short notice fight after being away from the sport for two years as a 42-year-old is a bit of a reach. Although he looked sensational in his last three fights against Keith Thurman, Adrien Broner and Lucas Matthysse, the betting line is disrespecting Ugas as a clever boxer with a stellar amateur background. Pacquiao might carry significantly more name recognition, but being a -430 is simply too much of a favorite to find any comfort betting on. Especially when Pacquiao is coming off of the longest layoff in his boxing career as he’s four months short of age 43.

That’s a lot to deal with.

Meanwhile, Ugas is a very live underdog due to his style and the fact that Pacquiao was forced to alter his training camp to face a tricky orthodox fighter rather than the stellar world champion he was set to face in Spence. It’s also worth noting that Pacquiao will likely have to overcome a position mentally where he went from an underdog to a heavy favorite. Is it possible that Pacquiao could be underestimating his opponent to some degree. Obviously, the same could be said for Ugas in terms of having to prepare for a fighter as unique as Pacquiao on such short notice. But there will be no letdown from Ugas as this is, undeniably, the biggest fight of his career. And a fight he knows he wouldn’t have had under normal circumstances.

Ugas (26-4) is best known for his performance against Shawn Porter in 2019. It was a fight that many thought Ugas won but fell short to a split decision. He’s not known as a knockout artist but his style is complicated for opponents and judges often struggle with their scorecards due to how well Ugas can neutralize the offense of whoever is across the ring with him. At first glance, Ugas by decision at +420 is simply too tantalizing to pass up in the event that the fight goes the distance and we end up with some wacky scorecards. It can absolutely happen.

But this is Manny Pacquiao we are talking about.

He’s been shafted twice before by the judges, against Jeff Horn and Timothy Bradley, but both had full training camps to prepare for him. It will be impossible for Ugas to find someone who can come close to mirroring Pacquiao’s unique style and speed, regardless of the Filipino legend’s age. As with most opponents lately, Pacquiao will stun Ugas early with his speed and power as the Cuban tries to adjust. By the time he does, he may be too far behind on the scorecards to dig himself out of the hole. Keith Thurman nearly did just that but the early knockdown and long adjustment period was too much to overcome and led to a split decision loss. Ugas isn’t as good as Thurman and if he can’t figure out how to time Pacquiao’s advances, he’s destined to lose a decision.

A knockout by Pacquiao sounds good in theory at +160 but boxing’s first and only eight-division world champion has had one finish in a decade. Ugas has never been knocked out and it’s unlikely to happen here. But a decision victory for Pacquiao at +120 is the best and safest bet.