Manny Pacquiao is the last of a dying breed

Manny Pacquiao is the last of a dying breed 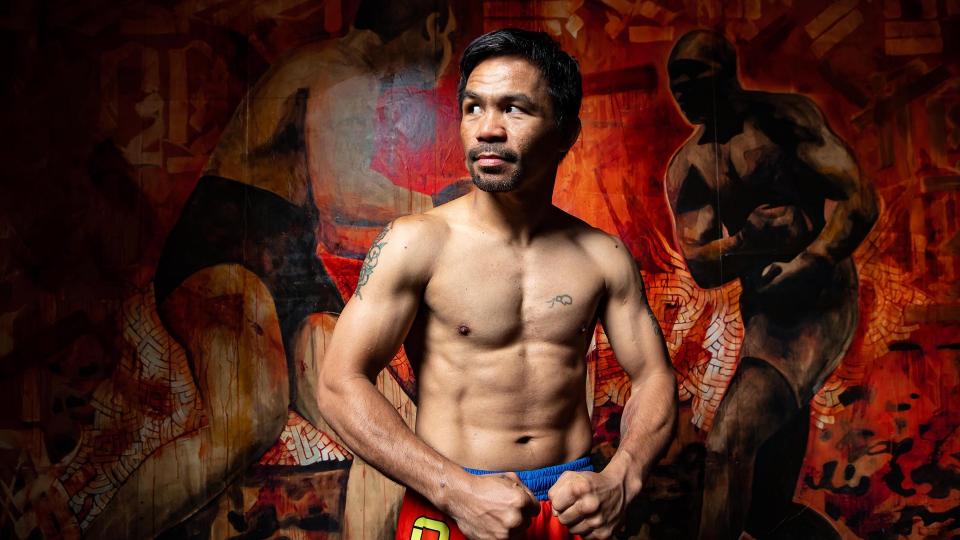 This probably isn’t the way that Manny Pacquiao pictured his prolific career coming to an end.

Unlike most fighters, Pacquiao wanted to end his career against the toughest opponent he could find. And for a man just a few months shy of turning 43 years of age, that’s abnormal. While a majority of his peers have retired and moved on to exhibition bouts against non-threats for immense paydays, Pacquiao is still here and looking to teach the next generation a thing or two about what it means to strive to be the best.

Boxing’s first and only eight-division world champion is holding court with a small group of reporters in the arena where he’ll be quite possibly stepping into the ring for the final fight of his career 72 hours later. But it’s not against the opponent he imagined. It was supposed to be against Errol Spence Jr., one of the best pound-for-pound fighters in the world who is perceived to be younger, bigger and stronger than Pacquiao.

This might be the last time Manny Pacquiao holds court for boxing writers before a fight.

“I want the biggest challenges,” Pacquiao says. Not everyone believed him. But he decided to challenge Spence in his perceived swan song from the sport.

Unfortunately, Spence suffered a detached retina in training just two weeks before the biggest fight of 2021 and Pacquiao will now fight the high risk, low reward Yordenis Ugas. And with it being possible that he announces his presidential candidacy in the Philippines and effectively ends his boxing career, it’s clear that Pacquiao wanted to go out with a bang.

“I felt disappointed a little bit because I’ve been working hard and focused on being at my best,” Pacquiao sighs when asked about Spence’s injury. But in true Manny fashion, he finds a silver lining in the cloud and attacks it with a smile. “When I heard it was Ugas because he took my belt, I said ‘OK.’”

Ugas has a world title that Pacquiao once owned but never lost in a fight. Instead, he was stripped of the WBA (Super) welterweight title because of inactivity. But with COVID ravaging the sports world, nobody was active. Alas, the World Boxing Association decided to take his title and give it to Ugas.

And Manny took that personally.

Now he wants it back because he likes titles. Not only is he boxing’s only eight-division world champion, but he’s also the only fighter to hold world championships in four different decades. He won them the hard way so he’s certainly not too fond of losing one without being defeated in a match.

Just over two decades ago, Pacquiao made his stateside debut in the very same arena on two week’s notice against Lehlohonolo Ledwaba for the IBF 122-pound title, the second major title of his career to that point.

“Twenty years ago I’m here for my first fight with Ledwaba supporting Oscar De La Hoya’s fight with Javier Castillejo on June 23,” Pacquiao recites before taking a moment to look around at the arena that essentially made him a stateside superstar. “I’m so thankful to the MGM for supporting Manny Pacquiao.”

Back then, Manny Pacquiao was the hunter. Two decades later, he’s the hunted.

The manner in which the tiny Filipino fighter rampaged through weight classes was unheard of. Two years after defeating Ledwaba, Pacquiao shocked the world and announced his arrival by pummeling Marco Antonio Barrera to become a world champion as a featherweight. As his profile rose, so did his belt collection. Juan Manuel Marquez coughed up the super featherweight title, David Diaz was obliterated for a lightweight title, Ricky Hatton was viciously stopped to make him a 140-pound champion, Miguel Cotto was pummelled for a 147-pound title and Antonio Margarito’s size didn’t matter as Pacquiao throttled him to become an eight-division champion at junior middleweight.

The tear was astounding and turned Pacquiao from a little-known fighter from the Phillippines into one of the biggest megastars the sport had ever seen. But of his great accomplishments, the one that stands out the most had nothing to do with a world championship. In pro wrestling terms, it’s the fight that put him “over” as a star. And that would be the vicious beating he handed out to a legend and pay-per-view star in 2008.

“My most satisfying victory was against Oscar De La Hoya because I came from 135 to 147 pounds,” Pacquiao says to the reporters with a nod and a grin. “It was unusual. Not many boxers can do that.”

Not many fighters could sustain the kind of relevancy Pacquiao has had, either. Pacquiao would send De La Hoya into retirement at the age of 35, which some deemed as over the hill. But here Pacquiao is at 42 looking for the toughest opponents out there. When he won the WBA (Super) welterweight title against Keith Thurman in 2019, at the ripe age of 40, Pacquiao proved that he wasn’t here just to get a check. He was here to continue to prove to himself and the world that he was one of the best in the world.

He didn’t have to. And he definitely didn’t have to pick Errol Spence Jr. as his next opponent. He could have found an easier opponent to possibly be the final fight of his career. But that’s not how Manny Pacquiao is built. And that’s also the reason why he opted to fight a high-risk, low reward opponent in Ugas as a late substitute rather than cancel his plans to fight entirely.

Ugas is an Olympic bronze medalist with a tricky style that can be difficult to look good against. The Cuban truly announced his arrival as a threat when he battled Shawn Porter to a controversial split decision loss but made the division aware of his presence.

Nobody wanted to volunteer to fight Ugas unless they had to. But here’s Pacquiao raising his hand to accept the challenge.

“I never imagined what I would have accomplished in boxing from the beginning of my career leading up to now,” Pacquiao says. “I went from nothing to something in order to be an inspiration for people both inside and outside of the ring.

“This is going to be a good action fight and I’m going to do my best Saturday night because I love to make the fans happy.”

As Pacquiao’s profile grew, so did his ambition to help his people back home. He became a politician in 2010 and has served as a senator in the Philippines since 2016. Should he defeat Ugas, Pacquiao will likely face the toughest challenge of his career outside of the ring as it is likely that he will decide to run for president. And if he does that, the time commitment to a presidential campaign will require him to step away from boxing.

If that decision is made, he’ll leave behind a legacy that will go down as unrivaled in the sport of boxing. Floyd Mayweather may have the undefeated record but Pacquiao’s resume and accomplishments aren’t just hard to deny, they are impossible to ignore.

“That’s hard to do that,” Pacquiao says when asked whether he could see another fighter accomplishing what he has. “Four decades and eight weight divisions? That’s hard.”

He’s the last of a dying breed. A fighter who has never turned down a challenge despite the odds being stacked against him. Just as young fighters look to make their name fighting Manny Pacquiao, the Filipino is just as interested in making a name off them.

If you have a world title, Pacquiao wants it. If you are supposed to be the best, Pacquiao needs to test that theory. He’s not interested in taking soft fights or doing exhibition fights to pad his bank account. He’s interested in being recognized as the greatest. But in order to be the greatest, Pacquiao cannot simply do that inside the ring — he has to be not only the best boxer, but the best human being for his people.

“My heart’s desire is nothing material,” Pacquiao says. “Whatever I’ve done, my fame or fortune (doesn’t matter). What is important to me is my relationship with God and how I can help others. That’s what is in my heart. Later on, after Manny Pacquiao is gone from this world, I want them to remember that Manny Pacquiao is one of the best boxers in the ring, but he’s a nice guy who is helping people.