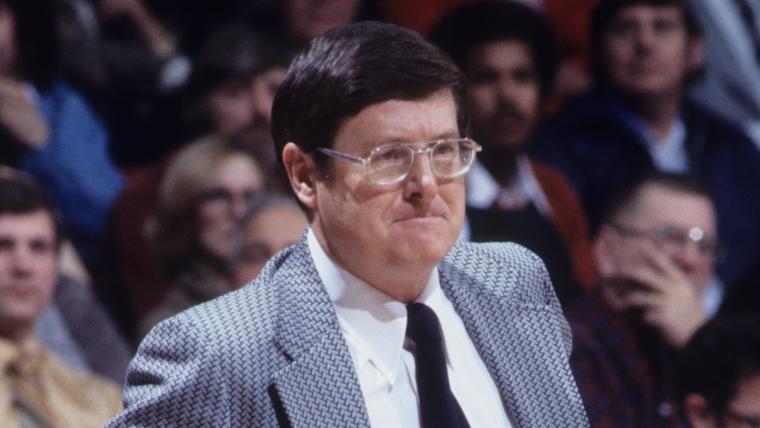 Joe B. Hall, a college basketball coach of 19 years who led Kentucky to a national championship season in 1977-78, died on Saturday in Lexington, Ky. He was 93 years old.

The passing of the College Basketball Hall of Famer was announced by Kentucky’s John Calipari, as well as the Kentucky men’s basketball team:

Coach Joe B. Hall – my friend, my mentor, and an icon in our state and in our profession – passed away this morning. Joe B. Hall took over a program and carried on the winning tradition and legacy of excellence of Kentucky basketball. pic.twitter.com/QirdXnAeMH

It is with great sadness we share the passing of the great Joe B. Hall. Our hearts are with the Hall family.

We love you, Joe B. pic.twitter.com/SahjbGOexb

Hall, a native of Cynthiana, Ky., was a former Kentucky basketball player; he was a member of Adolph Rupp’s 1948-49 national championship team before transferring to play at Sewanee. Though Hall used up his remaining eligibility playing for the Tigers, he did not graduate; he returned to Kentucky to finish his undergraduate degree, graduating in 1955.

Hall began his coaching career at Regis University from 1959-64, compiling a 57-50 record. He then spent a year coaching what was then called Central Missouri State, leading the Mules to a 19-6 record. Following that season, he returned to Kentucky to serve as an assistant under Hall of Fame coach Adolph Rupp from 1965 through 1972. He took over the program in 1972-73, leading the Wildcats for 13 seasons.

Hall compiled a 297-100 record in 13 seasons at Kentucky, with his worst season coming in the second year of his tenure: The Wildcats finished 13-13 and did not make the postseason, the only time of Hall’s career. He also enjoyed plenty of success, bringing in eight SEC championships; 10 NCAA Tournament berths; two NIT berths — including a championship in 1975-76 — four trips to the Elite Eight; two Final Four trips; and the 1978 NCAA Tournament championship, the fifth in Kentucky program history and first in 20 years.

Hall coached seven players to earn All-America honors 11 times. Twenty-four of his players also went onto play in the NBA.

Hall was a beloved figure in Kentucky, even following his retirement. He remained closely tied to the program, attending practices and attending home games at Rupp Arena. He also hosted a radio show with former rival and Louisville basketball coach Denny Crum — called the “Joe B. and Denny Show” — from 2004-14. In 2012, Kentucky unveiled a statue of Hall outside Rupp Arena to commemorate his accomplishments at Kentucky.

His passing created a wave of well wishes and memorials on social media, not only from Kentucky basketball fans, but also the college basketball world at large:

BBN, nobody gave their heart & soul to UKBB like Coach Hall. He loved the BBN and was a proud Kentuckian. An honor to play for him and will miss my life long friend. He was the only friend I ever needed. Thank you Coach & by profession in Christ rest til we meet again💙

Thank you for everything Coach Hall.
Rest In Peace, you will be greatly missed. pic.twitter.com/rJvwTmcGv6

Joe B. Hall was the first Kentucky coach I ever knew. Little did that kid from Western Kentucky realize that one day he would get to know Coach Hall personally. He was a kind, grateful man who was given an almost impossible task and yet still succeeded. Rest easy, Coach! #BBN

Will never forget Coach Hall, who at his advanced age struggled to stand and walk, standing for 8+ minutes straight at my father’s memorial service while sharing countless memories. He had the room rolling in laughter as displayed by @tbearup & @RexChapman. pic.twitter.com/yi8n82ikLw

Josh @MrJoshHopkins and I got to spend some time with Coach Hall a couple of weeks ago. So happy we did. What a coach. What a man. What a life.

The pride of Cynthiana, Kentucky. Rest In Peace, Coach… pic.twitter.com/jI5Uhh47RG

Coach Joe B. Hall was not only a remarkable basketball legend, he was also a kind, generous leader who made an impact on his players and everyone who knew him. Britainy and I extend our deepest sympathies to Coach Hall’s family as they mourn this heartbreaking loss. ^AB

Coach Hall is beloved by everyone. What makes me happy on this extremely somber day is that before he left this earth, he knew how much all of us appreciated and loved him. I would ask that everyone keep him and his family in your prayers. I love you, Coach. pic.twitter.com/hm7apfFQBU

Coach Hall was one of the best people I knew at UK. He was a great friend and defined a true legend who never saw himself in that light. My wife Allison shares his bday and he would tell me to have the Rupp fans sing to her and Ellen Calipari instead of him. I will miss you Coach https://t.co/0D76AMDBDV

RIP to the wonderful Joe B. Hall, who coached 1978 Kentucky to an NCAA championship. In retirement, he became one of UK’s terrific ambassadors, did a radio show with old rival Denny Crum. Just a lovely man. He lived a great, long life.

God Bless my buddy Joe B Hall, always a devoted Kentuckian with unending love for his family, his Kentucky Wildcats, and his every chance to make others laugh. RIP, Coach Hall. ❤️ pic.twitter.com/NSI880D7zQ