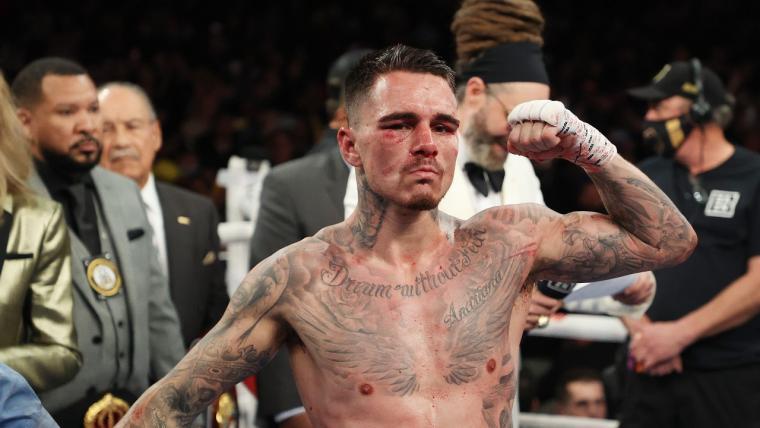 George Kambosos Jr. turned heads around the boxing world with a sensational upset victory over Teofimo Lopez, with Manny Pacquiao among those to share praise for Australia’s newest world titleholder.

The split-decision victory, which saw Kambosos crowned IBF, WBO, WBA and The Ring lightweight world champion, has even been discussed as Australia’s greatest boxing performance on the world stage.

Faced with heavy odds and a New York crowd in Lopez’s favor, Kambosos rode his way to victory by weathering an early storm from his superstar American opponent before exploding in the middle rounds to win over the judges, who awarded a 115-111, 115-113, 113-114 victory.

“I believed in myself, I backed myself,” Kambosos said postfight.

MORE: How much will Lopez, Kambosos make for their fight?

“I thought, ‘I’m going to hit him hard and put him down,’ and the fight changed off that. . . . I’m an unbelievable boxer. I can’t believe how good I boxed.”

“My defense, my movement; too sharp, too fast, too strong. My conditioning and my stamina were unbelievable.

“I got excited too much, I got caught. But you know what? What a warrior. I got back up against all odds and still finished the fight and won the next round.”

Kambosos' warrior-like performance against the odds stunned many and had some of the biggest names in the game showing him praise.

Congratulations to my friend, @georgekambosos, on an epic win! You helped me in so many of my past fights, I hope our hundreds of rounds of sparring helped you in some way tonight. I’m proud of you. #LopezKambosos

George welcomed Teofimo to the land down under💤

that was a fight that 100% lived up to the hype. what a war. congrats to Kambosos. Teofimo will be back✊🏼 #LopezKambososJr

Teofimo making a fool of himself #LopezKambososJr

While Kambosos won over the boxing world with his victory, Lopez’s reaction also caused quite the stir. The defeated defending champion sensationally claimed after the fight that he won the 12-round fight “10-2.”

“He’s a hell of a fighter, but I won tonight, everybody knows that,” Lopez said to a backdrop of heavy booing from the local crowd inside the Hulu Theater at Madison Square Garden.

Lopez ranting he won the fight 10-2. He is not in reality. #boxing #LopezKambosos