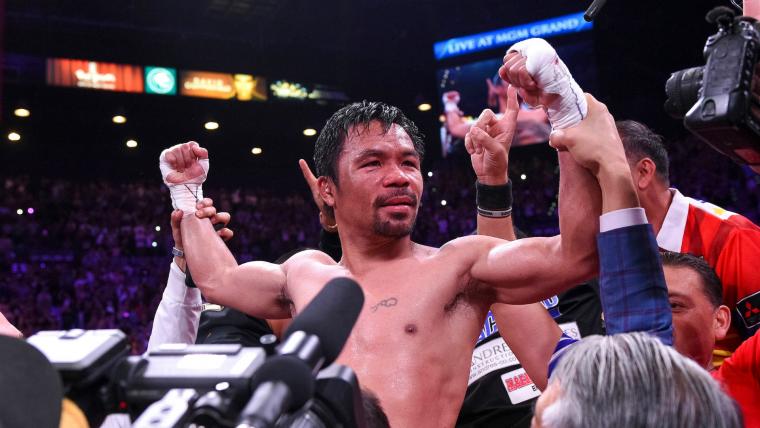 The curtain has been drawn on one of boxing’s finest careers after Manny Pacquiao announced on Wednesday he was hanging up the gloves for good.

The only boxer ever to win world titles in eight different divisions, the 42-year-old Filipino described retiring as the “hardest decision” he’s ever made.

Pacquiao departs the sport with a record of 62 wins (39 KOs), eight losses and two draws, and as the only fighter to hold world titles in four different decades.

The news comes just over a week after Pacquiao announced he would be running for president of the Philippines in 2022.

Already a senator in his home country, Pacquiao took to social media to inform fans of his decision.

To the greatest fans and the greatest sport in the world, thank you! Thank you for all the wonderful memories. This is the hardest decision I’ve ever made, but I’m at peace with it. Chase your dreams, work hard, and watch what happens. Good bye boxing. https://t.co/Bde4wO82sA

“It is difficult for me to accept that my time as a boxer is over,” Pacquiao said.

“Today, I am announcing my retirement. I never thought that this day would come.

“As I hang up my boxing gloves, I would like to thank the whole world, especially the Filipino people, for supporting Manny Pacquiao.

His much-hyped 2015 fight with Floyd Mayweather remains the best-selling pay-per-view event of all time.

In his departing speech, Pacquiao made special mention of his late former manager Rod Nozario, as well as legendary trainer Freddie Roach.

“And I will never forget the one person who helped me, Rod Nazario, who was once my manager,” Pacquiao said.

“He brought me to the United States 20 years ago and arranged my introduction to my trainer Freddie Roach at Wild Card Boxing Gym.

“Freddie Roach was not only my trainer, but also my family, a brother and a friend.”

Pacquiao will now turn his attention to his political career, where he has been nominated as a potential successor to current president Rodrigo Duterte.