'All in': Why Tim Tszyu has an 'extra edge' over Jermell Charlo in world title bout

'All in': Why Tim Tszyu has an 'extra edge' over Jermell Charlo in world title bout 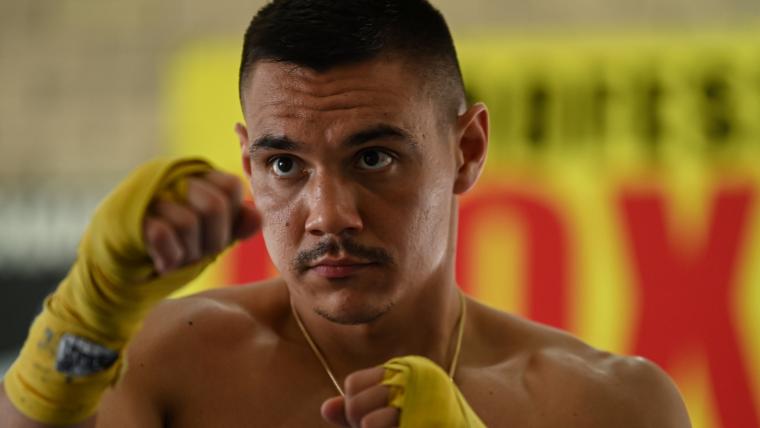 Tim Tszyu may be 100 days out from his first world title fight but his preparation is already in full swing.

While most top level boxers will put in a 12-week training camp for a fight, Tszyu looks at it differently.

“People dream about this, people work all their life and I’ve finally gotten to the stage where it’s here, this is it.

“One shot, one opportunity. I’m going all in, no plan B,

The Aussie will take on American Jermell Charlo for the undisputed super-welterweight world title in Las Vegas on January 28 (Jan. 29 in Australia).

MORE: Who’s next for Haney after win over Kambosos? Start with Tank and Loma

Tszyu’s road to number one contender has been well-publicised - the son of a former undisputed world champion and all-time great was always going to have plenty of eyes on him when he joined the family business.

That journey, Tszyu says, has also given him an understanding of the recipe for success in the sport.

Having recently returned home from Thailand, the 27-year-old will soon be heading back to the south-east Asian nation for the next stage of his preparation.

“I like the fact that you’re surrounded by killers, surrounded by people that are on the same drive as you and what you want to achieve.

“You don’t meet many people like that in the outside world here in Australia. It’s good to be surrounded by those sorts of people.

“You’re surrounded by killers in that environment and it’s a mad spiritual feeling.”

Considering the challenge in front of him, Tszyu’s dedication and focus on his craft are understandable.

Charlo (35-1-1) first became world champion in 2016, before regaining the title in 2019 when he avenged the only loss of his career by knocking out Tony Harrison.

The 32-year-old became undisputed champion when he stopped Brian Castano in the 10th round of their rematch.

Since that night in May, Charlo hasn’t so much as uttered Tszyu’s name in public, even failing to mention him in a now-deleted Instagram post announcing the January bout.

“I think he hasn’t even started preparing,” Tszyu said.

“That’s the mindset. How can you call yourself a lion if one guy is in the jungle running up hills and the other one is at some fashion show?

“It’s got nothing to do with me, I’ll be ready and that’s all that matters.

“When I get to the Charlo fight, when that day comes, you’ll see the best Tim Tszyu possible.”

Tszyu made his US debut in March, overcoming a first-round knockdown to defeat Olympian Terrell Gausha via unanimous decision.

The Aussie battled illness in the lead up and suffered injuries requiring surgery to both hands in that bout.

Ahead of the Charlo fight, Tszyu, who is a $3 outsider with the bookies, is supremely confident and keen to show what he can do when fully fit.

“Six years in the game now, I’ve learned more about my body, what to do, what not to do, how to feel good on the inside, being able to eliminate distractions, how to eat properly, how to recover properly,” he said.

“I’m at a good stage in my career for my first world title fighting for the undisputed. It’s a good position to be in and I’m in a good space.

“Charlo’s not superhuman. He calls himself a lion, we’ll see who the lion really is.

“In my last couple fights, I haven’t been at 100 per cent but this fight is just the time where I’ll be able to showcase everything.