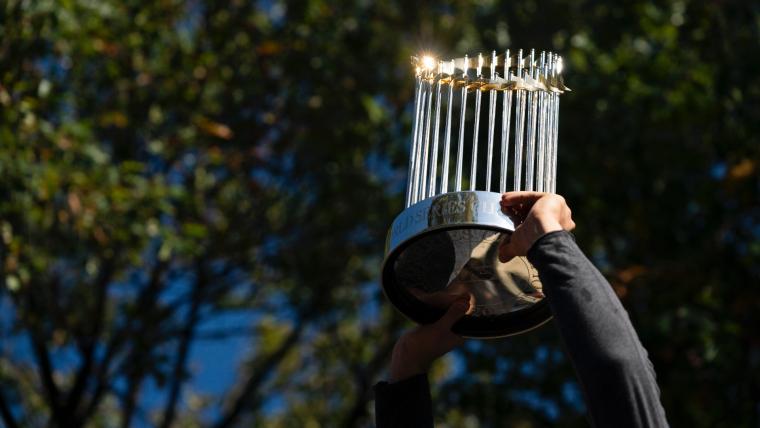 The Commissioner’s Trophy is in the building. It’s just waiting for its moment.

Baseball’s World Series trophy is one of the most recognizable pieces of hardware in sports. Adorned with its circle of flagpoles and a glowing exterior, it is not only one of the easiest to hold in sports, but also one of the most aesthetically pleasing.

The Sporting News lists unveils the facts behind an object that spurs plenty of interest from baseball’s fiercest fans.

What is the World Series trophy called?

The World Series trophy was christened the Commissioner’s Trophy in 1985, although trophy had been awarded since 1967. The name doesn’t quite roll off the tongue like the Stanley Cup or the Lombardi Trophy, but it isn’t unusual to name a championship trophy in honor of a commissioner. The trophy awarded to the winner of the NBA Finals is called the Larry O’Brien Trophy, named for former NBA commissioner Larry O’Brien.

How much does the World Series trophy cost?

Unlike Lord Stanley’s Cup, a new Commissioner’s Trophy is welded every year. Tiffany’s, one of the titans of the jewelry industry, crafts it. WSB-TV Atlanta reported that the 24-by-11 inch trophy costs anywhere from $20,000 to $30,000 to make.

MORE: Who is Korey Lee, and why is he suddenly on the Astros' World Series roster?

Does the World Series trophy have gold in it?

The World Series trophy takes on a tawny gold look, but it is, in fact, composed of sterling silver, just like the Lombardi Trophy, which Tiffany also crafts.

But while the platform of the trophy is silver, the flags are plated in gold. So, yes, there are hints of gold in the trophy.

How many flags are on the World Series trophy?

The most eye-catching aspect of the World Series trophy is the circle of flags that mimic the pennants that ring many major league ballparks. There are 30 flags on the Commissioner’s Trophy, one for each MLB team. If league expansion were to occur, expect the number of flags on the structure to increase in kind.

How many World Series trophies are there?

The Commissioner’s Trophy has been in existence since 1967, but the concept of a prize for the team that captures the Fall Classic goes back two centuries.

The Dauvray Cup, named after famed 19th- and 20th-century actress Helen Dauvray, was baseball’s first real championship trophy. Dauvray’s connection to America’s Game was simple: she was married to a ballplayer — Hall of Famer John Montgomery Ward. The celebrity marriage didn’t last, but the award did. It was handed out from 1887-93 before vanishing without a trace.

Before the American League came into existence in 1901, the Temple Cup was awarded to the winner of a best-of-seven postseason series between the top two finishers in the National League pennant race. It lasted from 1894-97.

After seven decades of not giving out World Series hardware, MLB — in conjunction with Massachusetts goldsmiths Balfour Jewelers — handed out the Commissioner’s Trophy in 1967 to the Cardinals, who beat the Red Sox in a seven-game series. It has been presented every postseason since.