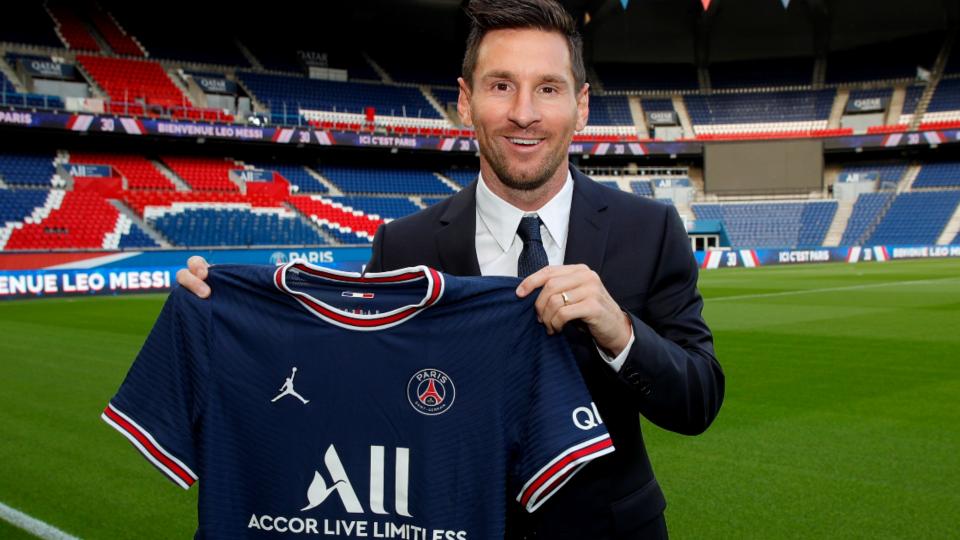 Lionel Messi officially has a new team, joining French power Paris Saint-Germain following 21 years spent with Barcelona. Messi signed a two-year contract with PSG with the option of an extra year, and he will reportedly earn $41 million annually

Barcelona sent shockwaves across the soccer world when it announced five days prior that it couldn’t afford to re-sign the 34-year-old, and PSG moved quickly to secure the services of the six-time FIFA Player of the Year.

Messi joins close friend and former Barcelona teammate, Neymar, as well as rising star Kylian Mbappe at PSG, along with a host of other big names assembled by the deep-pocketed PSG ownership group. The goal is clear: Help PSG win a UEFA Champions League for the first time in club history.

MORE: How much more is Messi earning than Ronaldo

“I am impatient to start a new chapter of my career in Paris”, Messi told the PSG website. “The club and its vision are in perfect harmony with my ambitions. I know how talented the players and staff are here. I am determined to build, alongside them, something great for the club and for the fans. I can’t wait to set foot on the Parc des Princes pitch.”

“I am delighted that Lionel Messi has chosen to join Paris Saint-Germain and we are proud to welcome him to Paris, with his family,” said Nasser Al-Khelaifi, the club president.

MORE: When will Messi play for PSG? Full schedule

“He did not hide his desire to continue to evolve at the highest level and to win trophies. The ambition of the club is of course identical. The addition of Leo to our world-class team confirms the relevance and success of our recruitment. Together with our great coach and his staff, I look forward to seeing our team make history for all of our supporters around the world.”

Why did Messi leave Barca?

Messi’s next move has been a topic of heated debate ever since he handed in a transfer request at Camp Nou at the end of the 2019-20 campaign, with Manchester City, Inter Milan and MLS club Inter Miami all reportedly interested in prying him away from the Spanish club.

Messi reluctantly stayed for an extra season at Barcelona, refusing to take the club to court to get out of the contract, and he helped Barcelona win one final title, the Copa del Rey. When his contract expired on June 30, it made him a free agent and eventually led to the end of his 21-year career in Catalunya.

Despite a well-documented financial crisis, new Barcelona president Joan Laporta was confident of signing Messi to a new contract and both sides confirmed there was an agreement in place. However, the renewal proposal eventually had to be torn up due to the fact Barcelona could not fit Messi’s salary within La Liga’s budget limits, leaving their talismanic captain with no choice but to confirm his exit in an emotional final press conference.

What will Messi bring to PSG?

PSG have signed a player who will surely be remembered as the greatest ever Barcelona player, with his staggering record of 672 goals through 778 appearances for Barca unlikely to be broken in the near or distant future.

Messi helped the Blaugrana win 34 trophies in total, including four Champions Leagues and 10 La Liga titles, emerging from the club’s academy to debut as a 17-year-old back in 2004.

The Argentina international’s vast experience and insatiable hunger for major silverware could prove invaluable for PSG as it bids for success on both domestic and European fronts in 2021-22.

Head coach Mauricio Pochettino will be expected to wrestle the Ligue 1 title back from Lille and take the club all the way in Europe, with Messi set to complete a mouth-watering front three alongside Neymar and World Cup winner Mbappe.