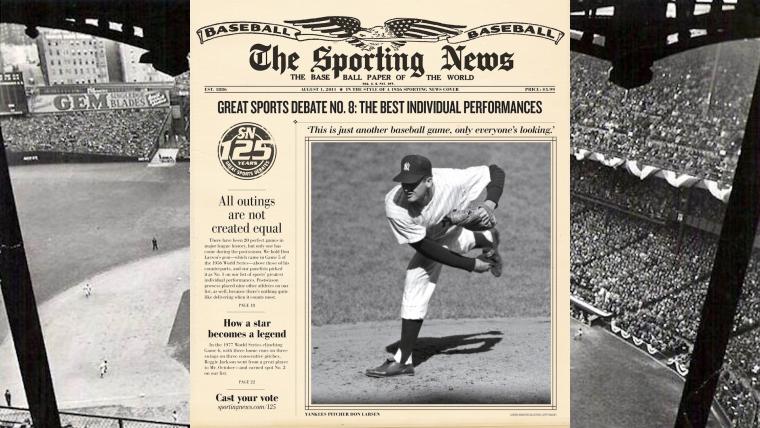 Let’s get this straight: The Astros' combined no-hitter against the Phillies is one hell of an accomplishment.

How else to describe only the second no-hitter in World Series history, dating back to 1903?

Armchair historians today may be saying, “Sure, I guess it’s a no-hitter, but it was no perfect game.”

Which is to say, they’re looking at a Monet and saying, “Sure, it’s a pretty field of flowers, but it’s no Van Gogh.”

C’mon, people. What are we doing here? A no-hitter is a no-hitter, no matter how constructed. Moreover, it potentially shifts momentum in this 2022 World Series.

A quick look at those 3 Postseason no-hitters 📹⬇️ pic.twitter.com/l4Cu6YucTF

But it wasn’t perfection, which is what Don Larsen accomplished in Game 5 of the 1956 World Series against the Brooklyn Dodgers, a series Larsen’s Yankees won in seven games.

This story, by correspondent Dan Daniel, a future Baseball Hall of Famer, first appeared in the Oct. 17, 1956, issue of The Sporting News under the headline, “Larsen Top Hero of All World’s Series • No-Windup Delivery Helps Don Achieve Perfect Game • Shakes Yogi Off Twice in 97-pitch Gem”.

NEW YORK, N. Y. — On October 1, 1903, the Red Sox and the Pirates started the first modern World’s Series. On October 8, 1956, exactly 52 classics and 53 years later, Donald James Larsen of the Yankees pitched the first no-hitter in the history of the inter-league competition.

On April 30, 1922, Charley Robertson of the White Sox pitched a perfect game against the Tigers, winning by 2 to 0.

Thirty-four years later, Larsen hurled the only perfect contest seen in the major leagues since then, beating the Dodgers, 2 to 0. and giving the Yankees a three-to-two edge over the club which had routed that some Larsen in the second phase of the classic.

In short, Larsen made himself the most astonishing hero in World’s Series history.

Nothing in the professional career of this 27-year-old native of Indiana, later transplanted to California, had hinted the extreme precocity which he demonstrated in that Series thriller.

Nothing in Don’s pitching past had evidenced the potentialities which blossomed so dramatically that sunny Indian Summer afternoon before 64,519 enthralled spectators in the Stadium.

Not until the seventh inning did it dawn on the vast majority of the fans that Donald James was achieving a no-hitter.

At a World’s Series, especially in New York, thousands of spectators have only a sketchy impression of the game. Around the seventh, the knowabout its began to buzz their information through the stands, and suddenly the house went on the qui vive, sitting on tenterhooks as Larsen, past the World’s Series record of seven and one-third innings without letting a batter reach base, kept, moving up to the consummate achievement.

When Larsen threw out Jackie Robinson in the eighth inning, he matched the record set by Herb Pennock for the Yankees against the Pirates in 1927, and tied by Schoolboy Rowe of the Tigers against the Cardinals in 1934. When Andy Carey followed with a splendid play on Gil Hodges. Larsen had a new record. But he was not satisfied with interim standards. He was after the big feat.

Larsen pitched only 97 balls to achieve his dazzling feat. Only one Brooklyn batter, Pee Wee Reese, reached the ball-three call against him. That was in the first inning. The next delivery was a called strike.

The Yankees had to make only four better-than-ordinary plays to help Larsen, Lady Luck gave him an assist when a long drive into the right field stands by Sandy Amoros went foul.

The big assists from skill came to Larsen in the second inning, when Robinson was thrown out, Carey to Gil McDougald to Joe Collins, on a ball that caromed off Andy’s upstretched glove; later in that round when Billy Martin ran into the outfield for a blooper by Amoros; in the fifth when Mickey Mantle robbed Hodges with a one-hand running catch in deep left-center; and in the eighth when Carey made a grand stop and throw on Hodges.

The tension became tremendous in the ninth inning, especially after Carl Furillo had flied out to Hank Bauer and Roy Campanella had grounded out to Martin.

Walter Alston sent up Dale Mitchell, former Indian, a left-handed batter, to swing for Sal Maglie, Babe Pinelli called Mitchell out on a third strike, and the roar of the crowd could be heard down on lower Broadway. Larsen said he had become aware of the no-hit aspects of his job in the seventh inning

“But I wasn’t giving that first place in my thoughts,” he explained. “I was after the game first, and anything else I could get after that. We had to win,

“I got fine handling from Yogi Berra, Did I shake him off?. Yes, twice. You see, the few times they hit a ball hard was off sliders. I began to get very choosey with that delivery.”

Casey Stengel said he probably was more excited than Larsen or anybody else in the Stadium. “I had more managers around me on the bench than any pilot ever had before,” Stengel revealed. The boys were helping me place the outfielders.

“I know the accomplishment will do big things for Larsen. He has tremendous ability. It’s a matter of sticking to business. He knows now how important that is if you want to make l’eal money out of this game.”

Within two hours after the contest had ended-it took only two hours and four minutes and was over at 3:04 EDT -Larsen had all sorts of offers making it possible for him to pick up several thousand dollars.

Larsen pitched that perfect game and routed the Dodgers at a very vital stage of the Series with a type of pitching that was some two weeks old with him. It was the no-windup delivery.

“How and why the no-windup?” Larsen, laughing, repeated the question. “I dug it up myself. On September 21 we opened our last series with the Red Sox in Boston. I had got the impression that Del Baker had been stealing my stuff and I decided to stop it. I made up my mind to go to the no-windup.

“Well, it has worked to perfection. How much more could I expect it to do for me? I fool the batters better, I have better control, I fool the Bakers, It’s wonderful.”

This man Larsen is a package of contradictions, a bundle of anomalies. No pitcher who ever turned in a no-hitter created greater surprise.

When in November, 1954, the Yankees made a big trade with Baltimore, they accepted Larsen with complete understanding of what they were letting themselves in for. Don was not among the more rigid adherents to training rules and club discipline. He was a problem for Paul Richards, and he quickly became a problem for Casey.

In fact, it was with a big sigh of relief that Stengel shipped Larsen to Denver early in the ‘1955 season. Don was 9-1 in the American Association. He was 9-2 in the American League that season. In the World’s Series he started the fourth game, went only four innings and was charged with the 8 to 5 defeat.

This past spring, Larsen worked hard and with assiduous attention to discipline. Then something happened. One March dawn, on his way back from the beaches to the Soreno Hotel” at St. Petersburg, Fla., Don drove’ his car into a power pole and cut it off clean. The car was wrecked. Larsen reported the mishap to the police and announced, “It’s not my day.” .

Stengel did not fine Larsen. He knew that this would be the wrong approach. He gave Donald a lecture, worked him harder than ever and hoped for the best. The hest came on October 8.

The Larsen no-hitter made the fans forget the remarkable pitching by Tom Sturdivant in the .6 to 2 six-hitter with which the Yankees had evened the Series at two games each only the day before.

Sturdivant had come almost out of nowhere to do a spectacular job. But an even more spectacular one was on the way.

A 3-21 pitcher for the Orioles in 1954, Achiever of the only no-hit game yet seen in the long history of the World’s Series, Larsen truly stands out as a miracle ball player

His talents, before he joined the Yankees, were hardly in evidence. He was a member of the Browns' organization during the early stages of his career and broke in with Aberdeen in the Northern League in 1947. He won four and lost three that season, but the following one he had a 17-11 record with the same club.

Before he joined the Browns in 1953 for his major league debut, he had hurled for Springfield (Three-1), GlobeMiami (Arizona-Texas), Wichita (Western), Wichita Falls (Big State) and San Antonio (Texas).

And for his entire career in the minors he had a record of only 30 triumphs and 29 defeats.

As a personality, the big Yankee right-hander is an oddity. He says little, knows a lot more about life and pitching than folks generally believe. He is a neat dresser, one of the neatest on the club. - Don is married. Interviewers never were able to get much out of him on that subject, but the fact remains that on the very day he pitched the perfect game, Mrs. Larsen sued for non-support of a child.