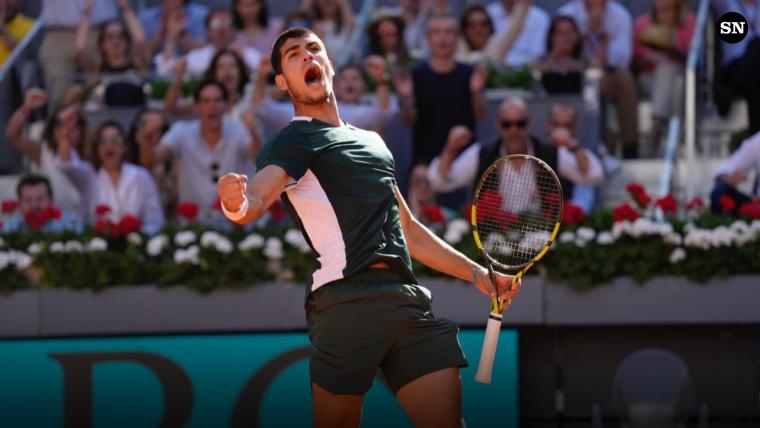 The rise of Carlos Alcaraz continues to gain momentum after the teenager beat Rafael Nadal and Novak Djokovic over consecutive days at the Madrid Open.

Alcaraz, who recently broke into the ATP top 10, has enjoyed a breakthrough 2022 that is showing no signs of slowing down.

After winning his maiden Masters 1000 title at the Miami Open in early April, the 19-year-old also recently took out the Barcelona Open.

The talented Spaniard is now on the cusp of another title on home soil after two stunning results in Madrid.

After losing his first two matches against Nadal, Alcaraz made it third time lucky during their quarter-final clash on Friday.

The teenager and tournament’s seventh seed fought back from a disastrous second set to defeat Nadal 6-2 1-6 6-3.

Just 24 hours later, Alcaraz then found himself playing against world number one Djokovic and lost the first set in a tie-break.

Those two wins have made Alcaraz the first player to beat Nadal and Djokovic in consecutive days on clay.

“This gives me a lot of confidence to play the final tomorrow,” Alcaraz said after seeing off Djokovic.

“I know that I played a really good game, and for the rest of the season I think I am able to play against the best players in the world and beat them as well, so it gives me a lot of confidence.

“To play against the number one player in the world, in front of this crowd here in Madrid, it’s incredible.

“Despite the tension, despite being the semi-finals of a Masters 1000, being 7-6 in the third-set tiebreaker…I’ve enjoyed it. Until the last point I was being able to smile.”

Alcaraz, who is now chasing his fourth title of 2022, will face second seed Alexander Zverev in the Madrid Open final on Sunday.