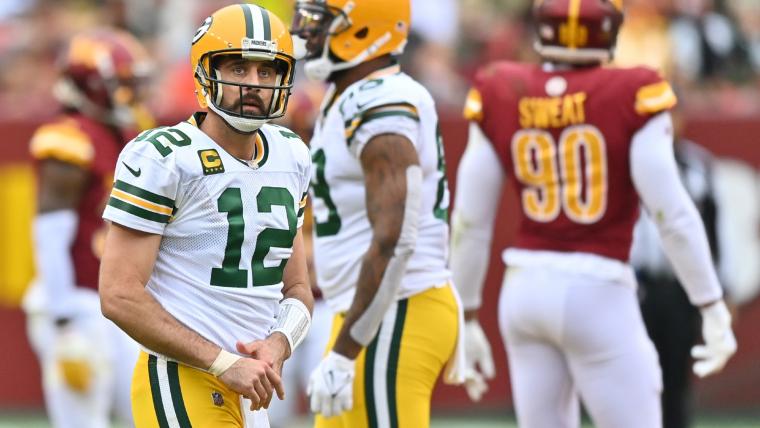 Aaron Rodgers entered the 2022 season with aspirations to become the second quarterback ever to win three straight NFL MVP awards. It’s safe to say that, through the first seven games of the 2022 season, the narrative around Rodgers has shifted drastically.

The Packers are 3-4 ahead of a daunting road clash with the Bills on Sunday. According to Stathead, the Packers have begun a season 3-4 just seven times, and just three times made the playoffs in those season. Green Bay has never made the postseason when starting 3-5 in the four times it has happened.

There are myriad factors in Green Bay’s slow start. There’s the absence of Davante Adams. The defense has allowed at least 23 points in four straight games and in all four losses. But Rodgers has underperformed as well.

MORE: Are Rodgers and Brady broken? Debunking the worst narratives about the QBs

How do his stats compare to past seasons, and what stands out with the future Hall of Famer? The Sporting News takes a look.

Through the first seven games of the 2022 season, Rodgers has completed 66.8 percent of his passes for 1,597 yards and 11 touchdowns to three picks. He has rushed just nine times for 9 yards.

The advanced stats don’t look much better. According to Football Outsiders, his DVOA (defense-adjusted value over average) ranks 14th in the league at 5.8 percent. Rodgers posted DVOAs of 27.8 percent in 2021 and 33.7 percent in 2020. For seasons in which he has been the team’s starter, Rodgers has had just one (2015) in which he finished with a lower DVOA than 5.8 percent. His 73.2 PFF grade would be the lowest of his career since becoming a starter in 2008.

To be certain, his stats aren’t bad compared to the rest of the field. He ranks 10th in the NFL in passing yards and tied for sixth in touchdown passes. But the stats are a departure from the elite numbers to which NFL viewers have become accustomed. How his first seven games in 2022 compare to his first seven games in his back-to-back MVP seasons:

Including his abbreviated outing against the Lions to end the 2021 season, Rodgers has gone eight straight regular-season contests without throwing for at least 260 yards. The only other time that happened was in the first eight games of his NFL career, when he was a backup for seven of those games. His longest streak of such games as a starter occurred from Nov. 3 to Dec. 23, 2019, per Stathead.

Plenty of Green Bay’s issues in the passing game can be attributed to the struggles of Rodgers' receivers. Per Pro Football Reference, his bad-throw rate is down to just 12.2 percent, his lowest since the stat has been charted in 2018, while his dropped-pass rate is at its highest at 7.4 percent, 2 points higher than any other season. His on-target throw rate is a career-best 81.7 percent.

Still, there are areas in which Rodgers has not been up to standard. In 2021, he picked teams apart when he was kept clean, with a 29:1 touchdown-to-interception ratio and a 92.7 PFF grade in those situations. This year? He has a 9:2 ratio and a 73.9 grade when kept clean. He is completing 1.2 percent fewer passes than expected, per NFL Next Gen Stats, in 2022. He was at 3.3 percent above expectation in 2021 and 4.4 percent above expectation in 2020.

Rodgers is also attempting 25 percent of his passes behind the line of scrimmage and 42.2 percent of his passes in the short range. Last year, those rates were 17.3 percent and 45.4 percent, respectively. His medium rate (10-19 yards) was 17.1 percent compared to just 11.9 percent this year. According to Stathead, only the Chargers (14) have had more completed passes go for zero or fewer yards this season than the Packers and Broncos (11 each).

If this were just about any other quarterback, these passing numbers likely would not draw as much attention. They’re enough to keep any team competitive.