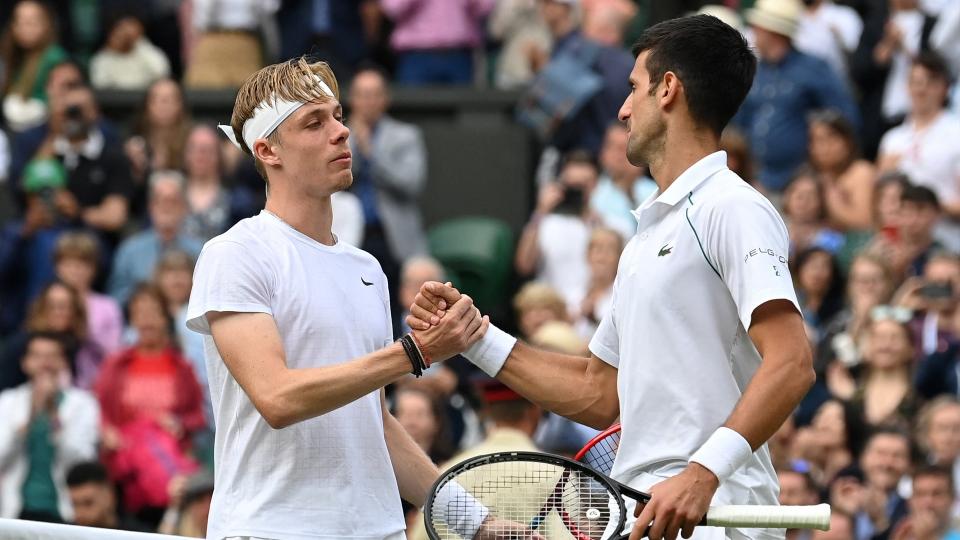 “I don’t think that the scoreline says enough about the performance and about the match,” Djokovic said during his post-match on-court interview after winning.

Indeed. The final line may have been 7-6(3), 7-5, 7-5, but the play of Shapovalov was on another level. The Canadian pushed the World No. 1 in every set. He led 5-4 in the first set before being broken and losing in a tiebreak He led 5-4 in the second set too and the third set but could not punch it through.

A native of Richmond Hill, Ont., Shapovalov kept the Serbian on his toes the entire match. Using his big serve and an all-around game to keep the 19-time Grand Slam champion off-kilter, he kept Djokovic on the run. Shapovalov edged him in winners (40-32) but had more than double the unforced errors (36-15). Both players had strong service games as the Canadian won 79 percent of the points on his first serve and Djokovic won 81 percent. The big glaring stat was the 22-year-old converting on just 1-of-11 break point opportunities. He had him, he just couldn’t seal the deal.

“He was serving for the first set and he was probably the better player for most of the second set and had many chances,” said Djokovic. “I would like to give him a big round of applause for everything that he has done today and also just these few weeks. This has been his first semifinal of a grand slam and you could see that he was emotional and, you know, we’re going to see a lot of him in the future, definitely.”

Djokovic will now face Matteo Berrettini in the final as he goes for a record-tying 20th Grand Slam title. He is also halfway to a Grand Slam after titles at the Australian and French Opens and could even snag a Golden Slam with a gold medal in a few weeks.

(All times are Eastern)

Point No. 1 is a slam behind Shapovalov. Point No. 2 goes to Djokovic as Shapovalov sends the backhand long. The third point is a return that goes into the net. And on match point, Djokovic ends things with an ace.

Is this where Djokovic breaks him again? Shapovalov starts with a double fault and then sends a forehand wide. But the Canadian battles back and hits an overhead smash before using an inside-out forehand down the line to get it 30-all.

Unfortunately, his serve falters again and he double faults, setting up another break point for Djokovic. Shapovalov saves break as the Serbian hits a forehand error but gives it right back with a backhand wide. Djokovic breaks as Shapovalov sends the forehand long. He is pumped up as he will serve for the match.

Shapovalov takes a 40-15 lead as his shot just skims the tape and falls over. Both players smile. He wins the game with an overhead smash.

Another easy hold by Djokovic.

On the third point, Djokovic goes to track down a short ball (which he probably wouldn’t have gotten to anyway) and slips and falls. He is OK and wins the fourth point to get it 30-all with a lob that lands on the line.

Shapovalov faltering here as he double faults to give Djokovic a break point. But he stays in and closes out a long rally with a one-handed backhand that brings up the chalk. Another game goes to deuce. Ad out as Shapovalov’s forehand goes into the net but he brings it back to deuce with a forehand volley into the open court. He then wins the game as Djokovic again can’t return his serve.

And then Djokovic holds as Shapovalov sends the return into the net. His energy looked a little down in that game.

Shapovalov serving and he goes up 30-0 with two winners before sending a forehand long and a forehand approach wide. But he holds, getting Djokovic to again hit the return off the court. The Canadian’s serve is on its game today as it continually makes Djokovic look human.

Djokovic has turned it up here as he runs down a short ball and comes up with a big-time shot to go up 40-15 — and get his own double break chance. Shapovalov slams the ball in frustration but he comes back to get two forced errors out of Djokovic. So it’s deuce and the Canadian double faults for another break point opportunity for Djokovic. Shapovalov forces another bad return and then gets Djokovic stretching to get to Ad In. He goes wide for an ace — something he did against Khachanov effectively but hasn’t done much of Friday — and wins the game.

Shapovalov again with a double break chance. Djokovic with the service winner on a second serve (120 mph on a second serve, yikes) and then while he is at the net, Shapovalov sends the lob long. Shapovalov showing some frustration to his box as he had the lob replayed. On the next point he hits the overhead for yet another break point but Djokovic, with a yell, fires off the ace to get it back to deuce.

Djokovic reviews the serve out wide and it was an ace, so advantage to the Serbian. Then, off a rally, Djokovic’s forehand volley goes into the net and back to deuce (#3). Shapovalov’s return goes wide to give Djokovic the advantage and Shapovalov’s big forehand just misses.

The Canadian settles down and wins the first game of the third set on five points — despite slipping on his second game point.

12:28 pm. — As Djokovic uses the break to leave the court, Shapovalov yells at the chair umpire about his calling of the game.

Shapovalov goes down 30-0 as his passing shot is wide and 40-0 as Djokovic executes the serve-and-volley to perfection. Djokovic with a service winner to take the set.

Djokovic is having a lot of trouble returning the serve of Shapovalov in this one and the Canadian goes up 30-15 as he pounces on bad returns. However, Djokovic would break the youngster as he double faults.

Shapovalov leads 5-4 After jumping out to 40-0, Djokovic gets two points before Shapovalov finally gets Djokovic to hit a bad backhand. Now the question is: Can the Canadian level the match?

An easy hold by Djokovic to tie things up.

Shapovalov showing his touch as he wins two straight points with a volley winner and then a dropshot volley to go up 40-0. He wins the game with another serve that Djokovic has trouble returning.

After a long rally, Djokovic sends the forehand wide and Shapovalov again has a double break point chance. One break point saved as Shapovalov’s backhand goes wide and the second saved off a service winner. At deuce, on a long rally, Shapovalov sends the forehand into the net. On Ad In, the Canadian hits the passing shot down the line and waves his hands to the crowd to get involved. Djokovic again gets the advantage as he hits a desperation volley near his head before firing an ace wide for the game.

After a big mishit, the telecast shows a spectator wearing a shirt that reads Shapovalov’s rally cry from just two days ago: “Anything is possible.” He then wins the next four points.

Shapovalov leads 2-1 Shapovalov goes up 30-0 thanks to a forehand winner that clipped the tape and a Djokovic forehand return that goes long. The Serbian then sends the backhand into the net to make it 40-0. Djokovic’s forehand approach goes long and things are on serve in the second set.

Down 30-0, Shapovalov with a deep return that leads to a mishit by Djokovic on the off-balance shot. But off a long baseline rally, he sends the backhand into the net to make it 40-15. With it 40-30, Shapovalov stops the point as he thinks the Djokovic shot was long and wants it reviewed. The replay shows it clipped the line and Shapovalov can’t believe it.

Shapovalov serves to start the set. On the first point, Shapovalov showing great movement as he gets a stab volley and then nails the overhead. He wins the second point with a forehand volley winner and the third and fourth points off serves down the middle that Djokovic can’t get back. The Canadian with a big, “C’mon,” after the game.

Shapovalov will now need to hold to force a tiebreak. He goes up 30-0 with a perfect backhand down the line and 40-0 with a swinging forehand volley off the weak return. He sends the set to a tiebreak as Djokovic’s return goes long.

Djokovic moving much better and finding his game holds serve.

Can the Ontario kid close out the set?

The game starts off with two unforced errors by Shapovalov. But then he gets Djokovic to hit the serve into the net to make it 15-30. After a review overturned an out call on a Shapovalov shot, he gets an ace on Djokovic’s backhand side to make it 30-all.

Making Djokovic move around the baseline, Shapovalov sets himself up for an easy winner but sails it long to give the World No. 1 a break point. He saves the break as Djokovic’s return sets up a swinging volley winner. Shapovalov then has two backhand errors to give Djokovic the game.

Down 40-0, Shapovalov fights back to get to deuce with some pinpoint shotmaking. Djokovic closes out the game as Shapovalov has trouble returning serves.

Djokovic having some trouble with the Shapovalov serve, setting up easy winners for the Canadian. He sets up two winners with poor returns before sending his game-point serve into the net.

Big-time return by Shapovalov to go up 15-0 before Djokovic levels the game. He would go up 40-30 and close out the game with an ace down the T.

Shapovalov leads 4-2 Shapovalov making Djokovic look human. The Serbian with three straight forced errors and then Shapovalov ends the game with an ace.

And then Djokovic follows with a hold on five points.

What a hold by the Canadian as he wins four straight points.

Shapovalov showing a range, as he rips the shot down the line setting up the approach shot winner to get double break points. Djokovic saves the first one as Shapovalov sends the backhand into the net. Then saves another as Shapovalov has trouble with the cross-court shot and sends the game to deuce. After Djokovic double faults, Shapovalov’s backhand after a long rally cannot be returned and he takes the lead. A big fist-pump from the 22-year-old.

Shapovalov coming into the net more lately levels the game at 15-all with a forehand volley winner. He then fires up an ace to get it 30-30 and wins the game as Djokovic returns his second serve into the net.

The Serbian wins the first game on four points, two via winners.

11:39 a.m. — Warmups underway with the roof open. Looks a little overcast and there is a chance of rain per Weather.com.