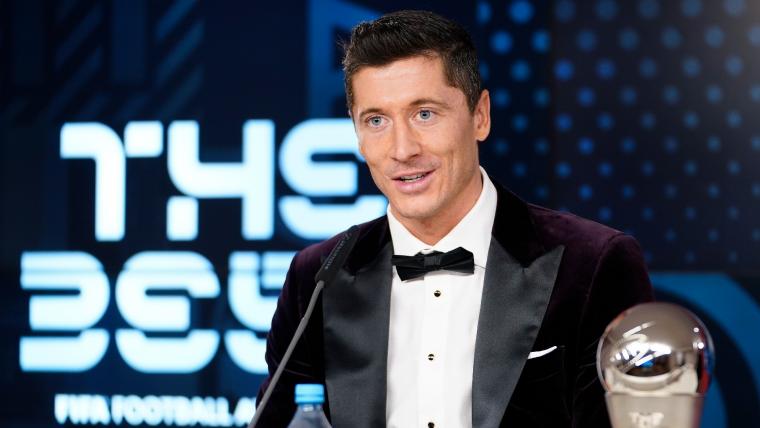 The final installment of the football awards season took place at FIFA headquarters in Zurich on Monday with FIFA’s The Best awards. The other major awards — Ballon d’Or, the Globe Soccer awards and the UEFA player awards — all took place in recent months.

And Bayern Munich forward Robert Lewandowski finally won an award in recognition for his standout 2021 campaign after missing out on both the Ballon d’Or to Lionel Messi and the Globe Soccer Award to Kylian Mbappe. For Barcelona’s Alexia Putellas, it was a clean sweep of all the major awards as women’s player of the year.

Lewandowski definitely had a better shot at this award since the main FIFA awards are voted on by: 1) current national team coaches; 2) the current captain of every national team; 3) one specialist journalist from each territory; and 4) fans registered on FIFA.com. Each of the four groups of votes carries the same weight (25 percent each). The Puskas Award for the best goal in the world, the Fair Play award and the Fan Award had different voting rules.

The event kicked off with a special recognition for Canadian star and the world’s all-time leading international goal scorer, Christine Sinclair, who won the FIFA Lifetime Achievement Award. It ended with a special award for Cristiano Ronaldo for setting the all-time scoring record in men’s international football.

FIFA Player of the Year (Men’s)

Robert Lewandowski finally came away with his trophy after missing out on the Ballon d’Or (Lionel Messi) and the Globe Soccer award (Kylian Mbappe) for the title of best player of the year.

The fans had Lewandowski in third place, giving Messi double the votes, nearly putting him even with the Bayern star.

FIFA Player of the Year (Women’s)

Make it a clean sweep for Alexia Putellas who previously won the Ballon d’Or, the Globe Soccer player of the year, and the UEFA Women’s Player of the Year awards.

The Best XI of the season for both men and women were voted on by players around the world in collaboration with FIFPro (detailed voting rules for the men and women).

Incredibly, Alexia Putellas didn’t end up among the midfielders for the women’s team and not a single Barcelona women’s player was named.

Both Cristiano Ronaldo and Lionel Messi made it on the men’s Best XI with four forwards named. This formation is frankly unprecedented when it comes to Best XI sides.

The rabona goal by Argentina attacker Erik Lamela (watch it here) won out as the winner of the prestigious Puskas Award for the best goal scored anywhere in the world in 2021. But it was a tight vote, with Mehdi Taremi’s bicycle kick earning top spot among fans.

The Puskas Award has been around since 2009, awarded for the most “aesthetically pleasing goal, regardless of competition” and “without the result of luck or a mistake.” It’s named after the Hungarian player Ferenc Puskas, who was known for his spectacular tallies at Real Madrid.

A list of 11 candidates was drawn up by an expert panel and the winner was voted on by FIFA legends and fans around the world via FIFA.com. Votes from the two groups (legends and fans) carried the same weight: 50 percent each.


FIFA Goalkeeper of the Year (Men’s)

This could be considered an upset win for Edouard Mendy over Gigi Donnarumma, and it came down to a tiebreaker: The winner was determined based on votes by national team captains per the award rules.

FIFA Goalkeeper of the Year (Women’s)

Christiane Endler won the award for the first time in three tries, beating out Canada’s Stephanie Labbe who played a huge part in helping Canada to Olympic gold.

“I’m the first one in Latin America to win this prize and it’s an honor for me,” Endler said. “It’s the third time I’m here. I was awaiting all the time to win it, and finally it’s the right time. Thank you to everyone who voted for me. I cannot be more proud.”

FIFA Coach of the Year (Men’s)

After winning the UEFA men’s coach of the year in Europe, Chelsea boss Thomas Tuchel won the FIFA The Best award, beating out the others in all four voting categories. Italy’s Roberto Mancini previously won the Globe Soccer men’s coach award, leaving Manchester City’s Pep Guardiola out in the cold during award season.

“It was a normal day so far. I’ve just come from training because we have a game tomorrow,” Tuchel said via video conference. “But you [Arsene Wenger] opened the envelope and said my name which is pretty surreal. I’m overwhelmed and I feel uncomfortable, actually.

“We lost a bit track to Manchester City in the [Premier] league, but in other competitions we follow our goals still, and we try to be the best versions of ourselves and try to perform at the highest level.”

FIFA Coach of the Year (Women’s)

This was thought to be a formality after Lluis Cortes won the three major trophies in the 2021 season with FC Barcelona and also won the UEFA Women’s Coach of the Year. But Chelsea coach Emma Hayes came away with the honor and she was speechless at the news.

“Wow. Honest, I’m not usually stunned, but I am. I’m completely shocked,” Hayes said on a video conference. “I put it down to the players and the fantastic people that represent my work. And ultimately, the coach is only as good as the people around them and I’ve got briliant people at Chelsea that have helped support the team to get to where we’re at. I’m absolutely shocked right now.”

There clearly was a difference in how the media viewed Cortes, and how he’s perceived inside the game with coaches and captains who him in third place.

This FIFA award has been around since 2016 and as the name suggests, it recognizes fans for an exceptional moment or gesture. This honor for the fans was voted on by the fans.


Here’s a bit of an explanation as to why each candidate was a finalist to begin with:

Denmark and Finland fans at Parken Stadium: For their shows of support in the wake of Christian Eriksen’s cardiac arrest episode at Euro 2021.

German football supporters: Supporters groups around Germany mobilized to help local communities after devastating floods that claimed more than 170 lives. Borussia Dortmund and FC Koln fans were among the fans that stepped up to collect money and other donations.

Imogen Papworth-Heidel: The 11-year-old girl who created a keepy-uppy challenge to raise money for essential workers in the UK during the pandemic. She did over a million of them herself.

It was a foregone conclusion that Denmark’s national team would win this award. “I think this award is for the whole of Denmark, which was standing shoulder by shoulder and standing by us as a team.”

This award annually recognizes gestures of sportsmanship, fairness and other good deeds around the sport. Here’s how it’s voted for. The list of three finalists follows below:

Scott Brown: The Aberdeen player/coach was a captain of Celtic Glasgow when before a rivalry match against Rangers, he went out of his way to shake Glen Kamara’s hand in the wake of a racist incident that Kamara experienced a few days earlier in European competition.

Denmark national team (players and staff): The Danish men’s team is up for the award for its collective response to the Christian Eriksen cardiac arrest at Euro 2021.

Claudio Ranieri: The current Watford coach is a candidate for having his Sampdoria team give Inter Milan a guard of honor in recognition of their clinching the Italian Serie A title.