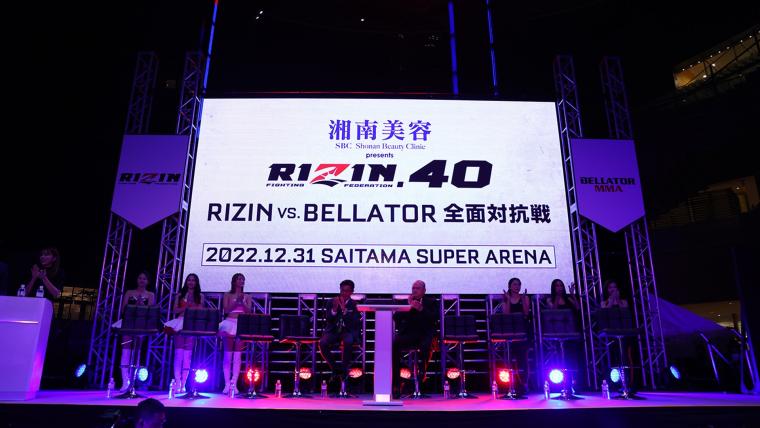 In 1976, Muhammad Ali and Antonio Inoki, two of the greatest combat sports stars of all time, faced off in a fight considered a forerunner to MMA.

Over the years, MMA has had its fair share of memorable fights. Styles can make or break matchups. That is especially true when top fighters face off against one another. From inter-promotional matchups to signed bouts, the history books have a fair share of classics to look back on.

On December 31, Bellator and RIZIN team up for the ultimate fight card. Inside Saitama Super Arena, Bellator’s best and RIZIN’s best face off for bragging rights.

Where will fights like Patricio Pitbull vs. Kleber Koike Erbst and A.J. McKee vs. Roberto de Souza rank among the best bouts between Japanese stars and their American/foreign counterparts? What is your favorite match, dating back to PRDE and beyond?

MORE: All you need to know about Bellator MMA vs. RIZIN

The Sporting News opens the vault, looking into the top fights featuring some of the most legendary Japanese fighters in the world.

Nick Diaz made the most of his only time fighting in PRIDE in 2007. The Stockton native fought PRIDE lightweight champion Takanori Gomi, a homegrown talent.

Both fighters did not disappoint at the opening bell with guns blazing. Between being on the ground and the standup position, the bout was almost a stalemate. Gomi landed a right later in round one that sent Diaz down to the canvas. It wasn’t enough to take him down for good, and Diaz returned the favor.

While cut by his eyes, Diaz worked past the defense of Gomi, who tried his best to maintain some form of durability. Diaz would end up shocking the world by landing a Gogoplata submission, forcing Gomi to tap out.

The win was overturned due to Diaz testing positive for marijuana, but the result and the shock of the then-win was a moment many will never forget.

In 2003, 14-1 Fedor Emelianenko was already considered a legendary fighter. A PRIDE heavyweight champion, Fedor was a heavy favorite against Kazuyuki Fujita at PRIDE 26. Fedor instead competed in one of the toughest outings of his career.

Fujita caught Fedor with a right hook that stunned him right away. Hurt, Fedor was brought down by Fujita. However, Fujita was unable to take advantage of his early efforts. Fedor landed combinations after getting back up. Fujita tried slamming Fedor down to the ground, but Fedor countered. A bloody Fedor landed a brutal kick and later submitted Fujita with a rear-naked choke.

While the match didn’t last long, it was a shocking moment that showcased one of the best in Fedor needing to dig deep for a big win.

A four-time World Jiu-Jitsu Champion, Royler Gracie would be the first victim of eventual “Gracie Hunter” Kazushi Sakuraba in 1999 at PRIDE 8.

Sakuraba beat Gracie via submission following a kimura, using a double top wrist lock. Sakuraba had a 30-pound weight advantage, and it showed. Royler could not secure a takedown or a strike from a standing position. Sakuraba punished Royler, with the latter offering no opportunity to engage.

Sakuraba became the first fighter to defeat a Gracie in MMA competition, a huge deal at the time. It also started a run for Sakuraba, who beat a member of the Gracie family four times.

One of the most brutal fights of all time, Don Frye vs. Yoshihiro Takayama was a car crash in the best way possible.

Frye, a UFC Hall of Famer, fought former IWGP Heavyweight Champion Yoshihiro Takayama at PRIDE 21 in another classic matchup between MMA fighter and pro wrestler. The fight started with the two teeing off against one another, similar to a hockey fight. They held onto the others head and started unloading with left hands to the face. The crowd erupted as they were watching chaos unfold.

The two would continue to land big blows as the fight continued, with Frye landing the better of the shots. Kicks and elbows were also traded, continuing the theme of the bout being violent. Frye brought it to the floor after Takayama attempted to take him down. Frye landed ground and pound shots, and the referee had no choice but to call it off.

It was a fight that was a test of the other’s might. Respect was earned following the war, and fans will never forget the brawl of a lifetime.

Royler wouldn’t be the last time Sakuraba took on a Gracie and won.

The rivalry between Kazushi Sakuraba and the Gracie family is legendary, as noted above. Starting at PRIDE 1 with Rickson Gracie vs. Sakuraba stablemate Nobuhiko Takada, Sakuraba made it a goal to take down the family.

A shoot-style pro wrestler, Sakuraba fought Gracie in front of over 38,000+ people inside the Tokyo Dome. It was a quarterfinal match of the PRIDE Openweight Grand Prix. With six 15-minute rounds, three overtime rounds, and no referee stoppages (per a request by the Gracie family), the fight lasted about 90 minutes, one of the longest MMA fights of all time.

Sakuraba started the fight by attacking the legs of Gracie and would not stop punishing the latter. Throughout the bout, Sakuraba had the edge over Gracie, who later decided that the match was more important than the tournament. In the sixth, Royce’s legs were so damaged that Rorion Gracie threw in the towel for him.

It was considered one of the greatest fights in PRIDE and MMA history. As a result of his efforts, being the first man to beat Royce in an MMA fight, Sakuraba became known as “The Gracie Hunter.”