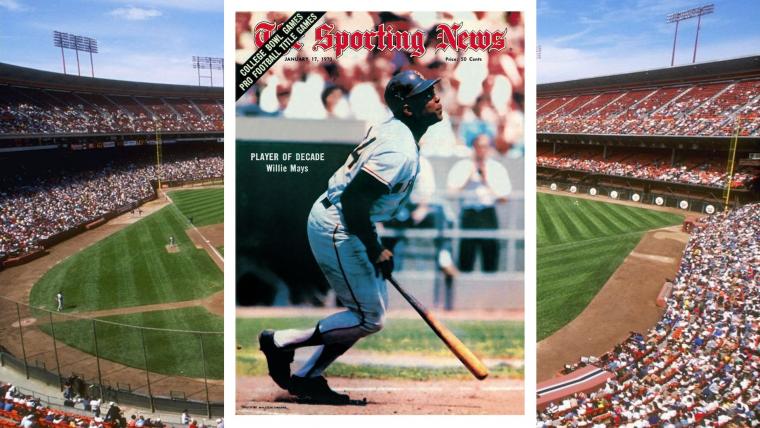 This story, by Bay Area baseball writer and Willie Mays biographer Charles Einstein, first appeared in the Jan. 17, 1970, issue of The Sporting News under the headline, “Best of Decade: One and Only Mays”, naming Willie Mays TSN’s player of the decade for the 1960s.

SAN FRANCISCO, Calif. — One gets the feeling that the recognition of Willie Mays by THE SPORTING NEWS as Player of the Decade may have been merited more than anybody realizes. It conjures up an obscure yet curiously opposite fact: For the ten seasons of 1960 through 1969, the decade covered by the award, and for only those ten seasons, the baseball home for Mays and the San Francisco Giants has been Candlestick Park.

Candlestick first opened for business at the start of the 1960 season. Already, it is an authentic relic. With the dedication of the new stadia at Cincinnati, Pittsburgh and Philadelphia, it will have become, in a weirdly foreshortened period of time, the second-oldest park in the entire 12-team National League.

But simply to say that Candlestick’s hair turned white overnight, or to point out that its decade of existence has coincided with the same ten-year span for which Mays, its most famous inhabitant, now is being honored, is to miss the point. For in significant measure, the award to Mays incorporates an added salute to him for a personal victory over the most unlikely of enemies: His own ball park.

They still call Yankee Stadium “the house that Ruth built.” Far from having built Candlestick Park, Mays never even saw the plans. His introduction to the arena came the day before the official opening of the 1960 season, during a session of batting practice. The first pitch he saw was a slider, delivered against a setting of wind, cold and fog. Willie was impressed. He should have been. The combined result of the pitch and the atmospheric conditions was that the ball sawed his bat in half.

Subsequent seasons have witnessed a succession of weather phenomena. Games have been halted on account of fog. A special law was established that if a pitcher was blown off the mound, it was not a balk. One fan sued the Giants on account of the cold, and won. An umpire called the infield fly rule on a ball that never came down: It went east instead, for a home run. Another pop fly descended directly over first base, which at that point was occupied by eight men: The hitter, the base-runner, the coach, the umpire, and four fielders, including third baseman Jim Davenport, who had called for the ball to begin with.

“I don’t know whether it’s the team or the climate,” Casey Stengel said, when he first brought his Mets to San Francisco in 1962, “but out here my fielders seem to run away from the ball instead of toward it.”

Over the years at Candlestick, Mays, more than any other outfielder, has managed, while in center field, to catch balls that suddenly dropped, sailed, veered or made right or left turns in mid-air. This is a tribute more to his astonishing speed of reflex than any advance meteorological information.

Of course, this is not to say he does not take the wind factor into account.

In positioning himself, in throwing, even in base-running, Mays has become a navigational expert. More than a few of the record number of runs he has scored at Candlestick have resulted from his recognizing the tailwind once you get past second.

But as a home-run hitter, there has been little he could do. His natural power, to left-center field, has been traduced so often by winds of up to gale velocity that he has been brought repeatedly to the point of swinging-one-handed, at times for the opposite field, away from his basic strength.

It is both symbolic and significant that the two landmark homers Willie hit at Candlestick — the 512th and 535th, one passing Mel Ott for the National League record and the other topping Jimmie Foxx' mark for righthanded batsmen and leaving Mays second only to Babe Ruth in the all-time table — both were hit to right field, which for Mays is the wrong field.

Far from having in his favor such tranquil and downright friendly places as were the Polo Grounds for Ott, Shibe and Fenway Parks for Foxx, Yankee Stadium for the Babe — or such box-like conveniences as Ebbets Field for Gil Hodges or Wrigley Field for Ernie Banks — Mays spent the bulk of his career operating against elements that seem dedicated to snatching his long hits out of the stands and depositing them instead in the gloves of dazed, but agreeable, defenders.

There is a story, possibly apocryphal, that once, after a particularly frustrating such afternoon at Candlestick, a Giant executive was approached for a team donation to hurricane victims. “All right,” he said, “but don’t ask Mays. He already gave at the office.”

It was Leo Durocher — his love and respect for Mays coalesced in the fact that his Cub pitchers habitually throw at Willie’s head — who first articulated the five things that Mays could in concert do better than anyone else in baseball history: field, throw, run, hit for distance and hit for average.

Bobby Bragan put it another way: “There isn’t a ball park in the league where they don’t take you out and point to a place in the outfield and say, ‘Here’s where Mays made the catch off So-and-So.'”

Gene Mauch: “He scored on me from first base on a single to left field.”

Harry Walker: “He bunted against me for a two-run double.”

Danny Murtaugh: “We gave him an intentional walk with the bases empty and he never stopped running.”

Walter Alston: “He threw for the cycle.”

He threw for the cycle? We have heard of players who hit for the cycle — a single, a double, a triple and a home run, all in the same game. But throw for the cycle? It happened — or darn near happened — in May of 1966, when the Giants were playing the Dodgers at Los Angeles, and Mays threw out one man at home, another at first, another at third. He had a fourth one nailed at second, but the second baseman, his back to the oncoming runner, turned the wrong way and missed the tag.

Like Alston, Mauch has been a manager in the National League continuously over the “Mays decade” of 1960 through 1969, and last season he was the only manager who deliberately walked Mays in order to get at Willie McCovey. Result: a McCovey home run.

In 1961, Mauch three times ordered Mays intentionally passed — in early innings each time —to get at Orlando Cepeda. Result: one Cepeda double, two home runs, for a total of nine runs batted in.

Is Mays the greatest clutch-hitter? Polls of baseball men have said so. But perhaps the record speaks better than words. We take you now to the Giants only pennant-winning season of the past decade, 1962

In the last game of the regular season, in his last time at bat, Mays homered to bring the Giants the victory that secured a tie with the Dodgers for the league championship.

In the last game of the league playoff, in his last time at bat, Mays singled — the key hit, making him the only man both to bat in and score a run in the four-run, ninth-inning Giant rally that brought the pennant to the Giants.

In the last game of the World Series, in his last time at bat, Mays doubled, putting the tying run at third and the winning run at second

Is 1962 too long ago? Then consider the night of September 22, 1969, at San Diego. That was the night Mays hit his 600th home run, and by now perhaps 100,000 San Diegans will tell you that they were there to see it. Be that as it may, even the 6,000 who were there will tend to forget that this was the last time in the ‘69 season that the Giants were still in first place in their division. Even fewer will remember that it was Mays’ home run that won the game and kept them there. Even fewer will remember that he came to bat as a pinch-hitter. Maybe Mauch is more right than wrong.

One recalls, too, Willie’s 400th home run, hit the night of August 27, 1963, at Candlestick (right field, of course) against the Cardinals.

At that point in time, a television producer, Lee Mendelson, was filming Willie’s every move for a forthcoming NBC special, “A Man Named Mays,” and part of the shooting took place in Willie’s car en route to the ball park.

“I think I’ll hit it tonight,” Mays said to the cameras, as he drove, “but it’ll have to be in an early inning, before the wind comes up.” He hit the home run in the third inning.

Producer Mendelson was left with no choice. He had to throw out the before-game prediction in the car driving toward Candlestick. “The only possible audience reaction would have been that we faked the interview,” he explained.

A Huge Ovation in Houston

Yet, far from being fruitless fakes, Mays’ milestone homers — as with the one at San Diego last September — have tended to win ball games. Or tie games that the Giants then went on to win.

His 501st homer was no milestone at all, but came at the height of the 1965 pennant chase at Houston. One September night, and it came with two out in the ninth with a man on base and the Giants trailing by two runs. With a 3-and-2 count, Mays fouled off five straight fastballs before he connected. And when he hit the sixth one out of the park, he got the greatest standing ovation in the history of the Astrodome.

The night he hit the home run that eclipsed Ott’s record, Mays was treated to a thunderous round of recognition yet the umpires bade the game go on. The result is a totally unbelievable photograph that hangs on the wall in the Giant front office. Here is Mays, coming out of the dugout to doff his cap to the multitude, and here is the multitude. looking not at him but toward the outfield instead. At that precise moment, the game having been ordered to continue, Tito Fuentes had just hit the first three-base hit of his major league career.

A roaring-mad Giant management shipped a complaint to the National League office, and that office responded even better than it knew. Orders went out: When Willie beats the Foxx record, hold up the game, any way you can. The umpires, who to a man are fond of Willie, approved. But one of them was fonder than anybody thought. Chris Pelekoudas was umpiring back of the plate the day Mays hit the Foxx-beating homer. He had it in mind to dust off the plate to delay the game.

But Pelekoudas forgot his whisk broom. Instead, he was the first man to greet Willie with a handshake.

“I didn’t know what I was doing,” he confessed afterward to National League President Warren Giles.

“Yes, you did,” Giles told him happily.

EDITOR’S NOTE — Charles Einstein, whose by-line appears in THE SPORTING NEWS for the first time, is the foremost biographer of Willie Mays, having authored three books on the Glants' star. Einstein is a 25-year member of the Baseball Writers' Association of America, baseball columnist for the San Francisco Chronicle and author of three Fireside Books of Baseball (Simon and Schuster).