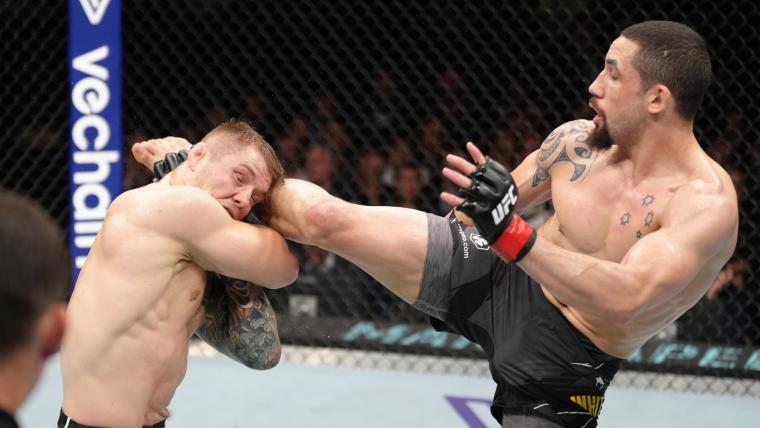 Whittaker turned in a near flawless performance to claim a unanimous decision victory over the second-ranked Italian in the co-main event.

Vettori’s wrestling was virtually a non-factor as Whittaker kept the fight on the feet for the vast majority of the three rounds.

After a close and cagey first round, Whittaker found his timing and went through the gears to show the full range of his skills.

The superior boxing of “The Reaper” was on display in the second round as he repeatedly landed on Vettori’s dome.

In the third round, Whittaker’s trusty head kick found its mark and wobbled his opponent, following up with punches and even securing a takedown of his own.

The cards were a formality (30-27x2, 29-28), announcing Whittaker, now 24-6, as the victor and confirming he remains champion Israel Adesanya’s biggest threat at middleweight.

HOW GOOD WAS THAT 👏

“I’m stoked with it. All respect to Vettori, that’s why I had to push back the fight the first time because I needed the fitness to be able to hurt him the whole time, he did not go away, I was hurting him,” Whittaker said after the fight.

Whittaker, who lost the belt to Adesanya before going down in a close one in the rematch, said he’s not going anywhere.

“Including the champion, I’m the most dangerous man in the division,” he added.

“I make people hate fighting, I take the love out of it for them.

“I’m always gunning for that top spot, I’m just going to be lurking there waiting.”

In the main event, Whittaker’s countryman Tai Tuivasa was on the receiving end of a brutal third-round knockout at the hands of local favourite Ciryl Gane.

Tuivasa threatened to pull off the upset when he dropped Gane in round two but the Parisian’s superior striking ultimately came to the fore, hurting the Aussie to the body with a barrage of kicks before wobbling and finishing him with punches.