LeBron James on moment with Michael Jordan at NBA 75 celebration: 'I didn't want to lose out on the opportunity'

LeBron James on moment with Michael Jordan at NBA 75 celebration: 'I didn't want to lose out on the opportunity' 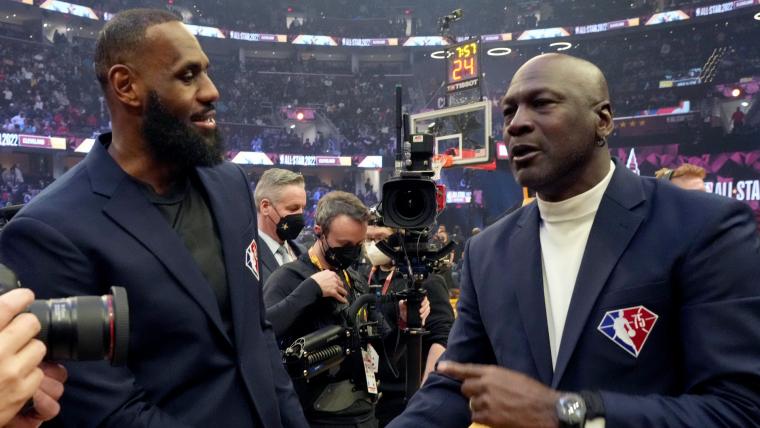 At halftime of the 2022 All-Star Game, the NBA honored the members of its 75th Anniversary team in a special presentation.

Just like it went down 25 years ago in 1997, the league amassed all members of NBA 75 at center court of the Rocket Mortgage FieldHouse for the ceremony.

This was one of two occasions late on Sunday, in addition to the pre-All-Star game photo-op, that all present members of the anniversary team were in each other’s company.

Two members of NBA 75, considered among the greatest players of the league, are legends in Michael Jordan and LeBron James.

It’s rare when these two all-timers are in the same arena, let alone sharing camera space.

After the All-Star Game, which witnessed Team LeBron win for a fifth consecutive year, The King talked about his interaction at halftime with His Airness.

“I haven’t had much dialogue with him in my 19 years in this business but part of me, wouldn’t be here without MJ’s inspiration,” James said.

“I always wanted to be like him growing up.”

"I did not want to lose out on the opportunity to shake the man's hand that inspired me throughout my childhood."

LeBron thanks MJ for being an inspiration 👏 #NBAAllStar pic.twitter.com/1uOxPMkjwQ

“It’s crazy that the game-winning shot tonight was a fadeaway and it was inspired by MJ.”

With that bucket, he finished the game with 24 points while also stuffing the stat sheet with eight assists, six rebounds and three steals in 36 minutes.

James and Jordan are the two most prominent names that come up in debates surrounding the league’s greatest ever player.

So, it’s certainly special to not only see the duo share a moment but also for James to reflect on it so candidly.