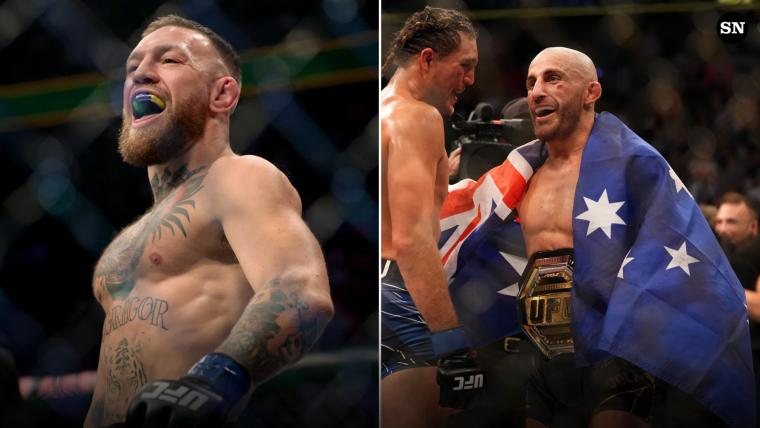 UFC great Conor McGregor has called out pound-for-pound king Alex Volkanovski, with the Aussie star set to push for the illustrious ‘double-champ status’ next year.

Volkanovski looks poised for a massive showdown against new lightweight champ Islam Makhachev, with the clash likely slated for the company’s return to Australia in February for UFC 284.

The 34-year-old Shellharbour native will be gunning to join an elite group of fighters that includes McGregor, Daniel Cormier, Amanda Nunes and Henry Cejudo, with the possibility of becoming a simultaneous double-champ well within his grasp.

But during a trademark night on Twitter for the Irishman, McGregor made a stack of wild posts that included a shot at the reigning featherweight champion and his likely next opponent.

My two old belts. On two little ticks. This fight does 10 buys pic.twitter.com/8AIzVyxQUl

Volkanovski was quick to respond to the insult, leading to a tense but amicable exchange between the pair, with McGregor even offering some words of advice for the 26-1 Australian.

Just watching and monitoring mate. That’s all. Happy for you in the spot tbh. I’ll be back. This is not over. You know.

And we dance on. Good. I was in your exact spot one time don’t forget. 145 coming up. Good luck. I’d say go heavier. Rugby days. Be a bowling ball. That’s how I’d do it as you. Your condition right now as i see it, I don’t know. But bowling ball style for you for best chance.

McGregor hasn’t fought since his loss to Dustin Poirier in July 2021, which saw the megastar suffer a nasty broken leg and force a doctor’s stoppage.

Volkanovski last stepped into the cage in July, defeating Max Holloway for a third time at UFC 276.