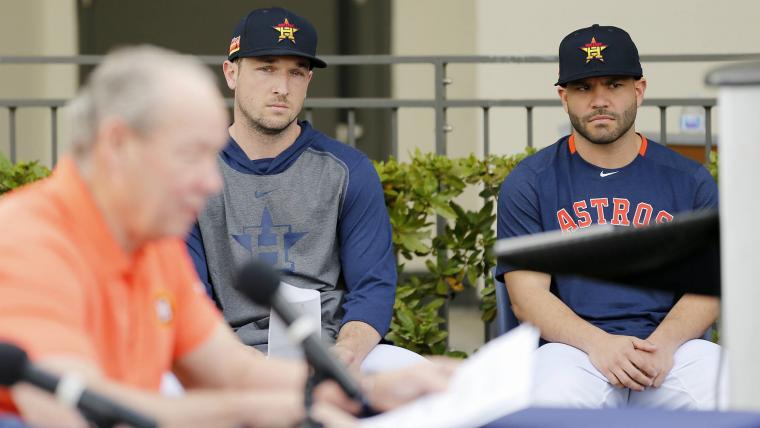 The Astros are back in the World Series for the third time in five years.

Though several years removed from the cheating scandal that tarnished its first title win in 2017, Houston has been unable to escape the shadow of the scandal. Opposing fans bring inflatable trash cans to games and consistently refer to the Astros as cheaters, as the memory of the 2017 run still lingers.

Here’s a complete look back at the Astros' cheating scandal, from when it was first reported to how long it lasted to the fallout from MLB’s investigation.

How did the Astros cheat?

The Astros' cheating scandal began early in 2017. According to the investigation report from MLB, Houston employees in the video room used game feed from the center field camera to decode and relay the signs of opposing teams to any Astros' baserunners on second base.

The means of relaying the signs often varied. With the runner on second, the team would have a go-between from the video room and the dugout, and personnel in the dugout would send the signal out to the runner on second, who would then signal to the batter which pitch was coming. Bench coach Alex Cora would also call the replay review room to hear the sign information and, sometimes, the replay review room would send a text to a smart watch or stored phone in the dugout to communicate the signs.

However, the report stated the scandal went further. Designated hitter Carlos Beltran and several other players devised a plan to improve the sign-stealing. Cora set up a monitor that displayed the center field camera feed directly outside the dugout, and a player would watch it and read what signs were coming. The team would then bang on a trash can to signal which pitch was coming to the batter. The trash can only came into play after trying out clapping, whistling and yelling.

The Red Sox were caught in a similar incident in September 2017, and the commissioner’s office sent out a message warning teams not to use replay equipment to steal signs or convey information to teams. The warning noted that general and field managers would be held responsible for the actions of teams if caught. The report stated that the Astros continued to use their sign-stealing strategy throughout the 2017 season and postseason.

While the trash can banging stopped in 2018, the report stated that the Astros still had the replay review room convey messages to runners on second, but eventually stopped as players decided it was no longer effective. The report said the Astros did not violate any MLB policy during the 2018 postseason, 2019 regular season or postseason.

Who was involved in the scheme?

The report found that the only ones directly involved with executive the scandal were the players, lower-level baseball operation employees and Cora.

As a result of the warning to teams stating that the manager and general manager would be held accountable for any illegal use of technology in the game, the players involved were not disciplined. However, the report stated most position players on the team either received signals or helped decode the signs. The players told investigators that if A.J. Hinch, the manager, had asked them to stop, they would have. The report said “virtually all of the Astros' players had some involvement or knowledge of the scheme.”

MORE: Fans might not be happy about Red Sox sign-stealing scandal, but MLB got what it wanted

It was found that Hinch was not involved in the scheme and did not support the scandal because he felt it was both wrong and distracting, but he also told investigators that he did not try to stop it nor tell the players or Cora that he did not approve of it. Cora was found to have helped develop the scheme both to use the replay review room to transmit signs to second and to use the banging scheme.

The report stated that Astros general manager and president of baseball operations Jeff Luhnow received several emails that at least mentioned the use of the replay review room, though he denied knowledge of the efforts to cheat. However, the report said he there is some evidence he had at least some knowledge, but might not have given it much attention.

What alerted MLB to the scandal?

MLB did not begin its investigation into the Astros until The Athletic’s Ken Rosenthal and Evan Drellich broke the story in November 2019 that the team stole signs. The key whistleblower in the situation was former Astros pitcher Mike Fiers, who signed with the Tigers before he was traded to the AL West rival Athletics.

“That’s not playing the game the right way,” Fiers told The Athletic. “They were advanced and willing to go above and beyond to win.”

Teams had reportedly already been on alert about the Astros by the time the report came out. The first known account of an opposing player learning about the scandal came in September 2017 when White Sox reliever Danny Farquhar noticed the trash-can banging, according to The Athletic.

Major League Baseball responded to The Athletic’s report by expanding its investigation into the Astros, which had initially been started only to investigate the actions of former executive Brandon Taubman. Taubman made inappropriate comments to female reporters after Houston won the 2019 AL Pennant regarding the team’s signing of Roberto Osuna, who had been suspended by MLB for violating the league’s domestic violence policies.

Yahoo Sports' Jeff Passan reported that in October 2018, the Indians and Red Sox became concerned that the Astros were stealing signs. That 2018 report was also the first mention of teams expressing concern that Houston was using a trash can to signal signs, with the Dodgers reportedly believing they cheated in the World Series.

Punishment for the Astros

In Manfred’s report, he said the conduct of the Astros warranted “significant discipline.” He said even though it was impossible to say if the conduct changed the outcome of any games, “the perception of some that it did causes significant harm to the game.”

As a team, the Astros lost first- and second-round picks in both the 2020 and 2021 drafts, or if the team loses any of the picks due to compensation in signing a free agent, the team would forfeit the next applicable pick. So if the Astros lost their 2021 first round pick by signing a free agent, they would then be stripped over their 2022 first round selection. The team was also fined $5 million, which was the maximum fine eligible.

Luhnow was suspended without pay in January 2020 through the end of the World Series that year. He was not allowed to work for the team or any other team during that time, and he could not be present during at any of the club’s facilities. Any further infractions made by him would result in being placed on the permanently ineligible list. The exact same punishment was handed to Hinch. Both Luhnow and Hinch were fired by the Astros. Hinch has since returned to become the manager of the Tigers.

Cora, who became the Red Sox manager after the World Series win, was not disciplined at the time as MLB awaited the findings of the cheating scandal into the Red Sox. He, too, was ultimately suspended for the entirety of the 2020 season, though he ultimately returned to Boston in 2021.