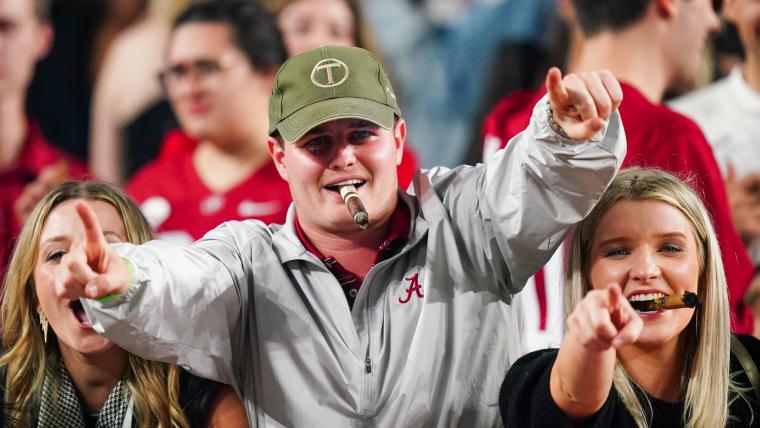 Regardless of who wins Saturday’s meeting between Alabama and Tennessee, CBS cameras are likely to find fans in the stands with victory cigars pressed between their lips.

The tradition has become a bit lopsided in recent years, but the practice of smoking a cigar following a victory in the “Third Saturday in October” rivalry is one shared by both the Crimson Tide and Volunteers. And it will be on full display again after Saturday’s game.

It’s not something that just fans of the teams enjoy, either: The tradition began in the Alabama locker room, spilled over into Tennessee’s, and has since become one of the more iconic traditions in college football history.

“I know it’s something that a lot of people really enjoy,” Alabama coach Nick Saban said in 2013 of the practice. “It’s not a tradition I started. It’s a tradition that was here that the players have continued.

“I think it’s something they have fun with. I’m happy that they do. Not really something that I’m interested in.”

The Sporting News looks at the victory cigar tradition between Alabama and Tennessee, when it began and more:

Why does Alabama-Tennessee winner smoke cigars?

Legend holds that longtime Alabama athletic trainer Jim Goostree, also a former trainer at Tennessee, made a bet to the Crimson Tide in 1961: If they beat the Volunteers outright for the first time since 1954, then he would dance naked in the locker room following the victory.

No. 5 Alabama won 34-3 over the Volunteers in Birmingham, Ala., and Goostree fulfilled his end of the bargain — with a victory cigar in tow. Players wanted to celebrate the victory too, beginning what would become one of the more distinct traditions in college football history.

According to a 2020 feature by ESPN’s Alex Scarborough, Goostree would pack a couple boxes of Tampa Nugget cigars in the case of an Alabama victory over Tennessee. If they lost, he would return them to the drug store and get his money back.

It’s something he only had to do seven times between 1961, when he started the tradition, and 1983, the year before he was promoted by Alabama to assistant athletic director: The Crimson Tide went 16-6-1 vs. the Volunteers in that stretch.

Is smoking cigars an NCAA violation?

For a long time, both Alabama and Tennessee supplied cigars to players in the event of a victory, keeping it a secret from the NCAA for fear they would be hit with violations regarding improper player benefits or allowing tobacco products into a locker room.

Alabama publicly reinstated the tradition in 2005 following the Crimson Tide’s 6-3 victory over Tennessee, the first in three years and only third since 1994. The university officially self-reports it to the NCAA as a secondary violation, though the organization has surprisingly allowed the tradition to continue with no issue.

That Butch Jones has smoked more cigars than Tennessee has in the last 10 years #TennesseeHateWeek pic.twitter.com/Z5fa84HrG1

VOL PACK IN THE AIR THIS GAS OR WHAT? 💨 #TIDE pic.twitter.com/7zUOaYqp3o

Chase Goodbread of The Tuscaloosa News reports that Tuscaloosa-based R&R Cigars — which opened in 2012 — has provided the winning cigars to Alabama for several years. Mike Locksley made the arrangement a more regular occurrence when he was still an offensive assistant under Saban in 2016.

Per Goodbread, the Crimson Tide have smoked Casa de las Estrellas since that season, with about 250 heading to Knoxville, Tenn., for the 2022 meeting. Each cigar costs roughly $10.

“We’ve spent a ton of time, energy and money to help make the Tennessee cigar tradition what it is,” owner Reagan Starner told the Tuscaloosa News. “But we’ve worked tirelessly to make this thing what it is today. It’s a huge week.

“To me it’s a classy tradition. They’re not setting mattresses on fire like they do in Morgantown (West Virginia), or some of the others,” Starner said. “You see them being an adult, doing an adult thing, smoking a cigar.”