How does the NFL's concussion protocol work? Explaining the five-step process for return to play

How does the NFL's concussion protocol work? Explaining the five-step process for return to play 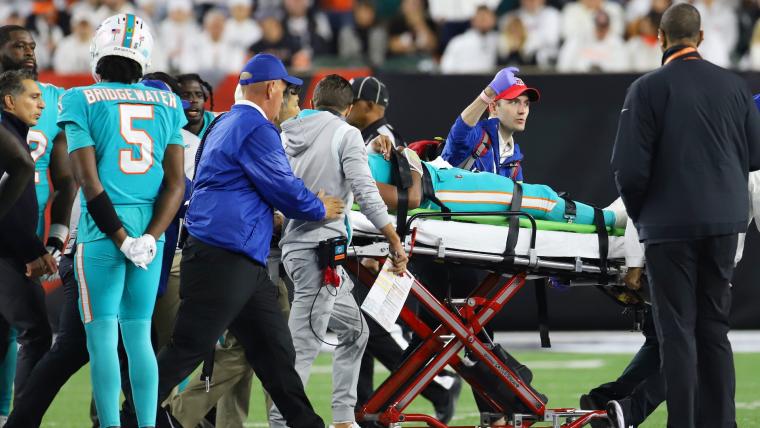 It wasn’t so long ago that concussions weren’t a big talking point in the NFL. Players who were hit hard were sent back into the game, and post-playing-days issues were attributed to factors outside the sport.

In today’s NFL, they are taken far more seriously. Players who are hit hard or appear to have any head injury are taken off the field and evaluated immediately for a concussion. If team staffers believe the player is seriously injured or at risk of a concussion, they will be pulled from the game.

The league’s concussion protocol is a complex process. Being placed in it and being activated from it require multiple steps.

The Sporting News walks through the NFL concussion protocol: what it is, how players are placed in it, and how they are removed from it.

What is the NFL concussion protocol?

The NFL concussion protocol is a series of steps players have to take to return to playing after suffering a concussion.

How does the NFL concussion protocol work?

If a player shows symptoms of a concussion, the protocol will be initiated by the person who spotted them. The player is taken to the sideline and examined for a concussion. They will be evaluated for any so-called “no-go” symptoms — loss of consciousness, gross motor instability, confusion, amnesia, fencing response, impact seizure — history of concussions, any other symptoms or a focused neurological exam. Following the findings of the investigation into the handling of Tua Tagovailoa’s injury, ataxia, defined as abnormality of balance/stability, motor coordination or dysfunctional speech caused by a neurological issue, was added to the list of no-gos. If a no-go is found, then the player is not allowed to return to the field.

If there are concerns a player might have a concussion, the player must undergo an exam by a team doctor or an unaffiliated neurotrauma consultant or athletic trainer. The protocol will be initiated if the examiners believe a player has a concussion. The protocol includes a follow-up neurological exam and periodic evaluation by the medical team. Players are not allowed to return to play during that time.

How long does the NFL concussion protocol last?

Players have to go through several steps before they can be medically cleared to play. Since each phase can take a different amount of time depending on the severity of the concussion, the timeline can differ wildly based on the player.

Here are the steps players have to take to leave the concussion protocol:

In this phase, players are asked not to engage in much activity. They are supposed to rest during this period and limit anything that could aggravate their symptoms. Eventually, players will be allowed to do limited stretching and light aerobic exercises, so long as team training staff are supervising.

Players will start to work on cardio exercises along with stretching and training, with team medical staff supervising. After this phase, players can start working on balance testing.

In the third stage, players can take part in football-specific exercises and start working with the team for up to 30 minutes under supervision. Players are also able to increase their cardio workloads.

Players reaching the fourth stage are able to start throwing, catching and running and engage in activities more specific to their position. They also can continue to ramp up their exercise and training. By end of this phase, players have to have undergone neurocognitive and balance testing.

The player has to be cleared by both the club physician and the independent neurological consultant to return to full activity.

DeCOURCY: Dolphins' mishandling of Tagovailoa’s injury is bad for football — and bad football

When did the NFL concussion protocol start?

The league’s concussion protocol started in 2011 when it was developed by the Head, Neck and Spine Committee. The committee is composed of independent and league-affiliated physicians and scientists as well as NFL Players Association advisers.

History of the NFL’s concussion protocols

Football has long been recognized as a dangerous sport, but it took a long time before the league began to consider concussions part of player health and safety.

The NFL did not start evaluating for concussions until 1994, according to PBS, when commissioner Paul Tagliabue appointed Dr. Elliot Pellman to chair the Mild Traumatic Brain Injury (MTBI) committee. Pellman, however, lacked experience in the area. Later that year, Tagliabue described concussions as a “pack journalism issue.”

In 1997, the American Academy of Neurology released guidelines that said players should be taken out of games if they have concussion-like symptoms within 15 minutes after an injury, due to the risk of further brain damage. Three years later, members of the MTBI criticized the report, saying it lacked research.

Hall of Fame center Mike Webster, who retired from the NFL in 1990, claimed in 1999 that his football career caused dementia. A year later, the NFL Retirement Board ruled his playing the sport left him “totally and permanently” disabled. Webster died of a heart attack at age 50 in 2002.

Dr. Bennet Omalu examined Webster’s brain shortly after Webster died and discovered the first evidence of chronic traumatic encephalopathy (CTE). In 2003, Dr. Kevin Guskiewicz warned in a paper that repeated concussions could lead to slower recovery of neurological function. At the same time, Pellman, who was the Jets' team doctor, sent wide receiver Wayne Chrebet back into a game after Chrebet had been knocked unconscious.

The MTBI committee said in a 2004 paper that 92 percent of concussed players returned to practice in less than seven days, in an attempt to downplay the severity of concussions. That same year, the committee criticized Guskiewicz’s research and said its study did not support his conclusions. The committee then published another paper in which it said NFL players are less likely to suffer brain injuries than the general population.

In 2005, the committee published another paper and said that players who come back to games after suffering a concussion are at no more potential risk of injury than those who are removed from the game after a concussion. Omalu published his findings on Webster that year.

After Omalu’s report was published, an MTBI committee member called it “fallacious reasoning.” Others called for the paper to be retracted. Instead, Omalu published a second paper in 2006. This time, he said he found CTE in the brain of former Steelers lineman Terry Long.

In 2007, the league began to question the process for returning players to the field. Commissioner Roger Goodell said he was concerned about players coming back from concussions. Later that year, Pellman resigned from the MTBI committee and Goodell hosted a concussion summit. The league sent out a pamphlet calling research on concussions inconclusive.

After some shuffling of the MTBI committee and more published research, the NFL finally acknowledged in December 2009 that concussions can have long-term impacts on player health. It published return-to-play guidelines that called for players with concussion-like symptoms to not return to games.

The NFL designated Dr. Ann McKee’s Center for the Study of Traumatic Encephalopathy at Boston University as its brain bank. The center would study damage to the brains of deceased NFL players. The league continued to fund research as more was learned about concussions. The center found CTE in Owen Thomas, a 21-year-old player at Penn, and former Bears safety Dave Duerson, both of whom committed suicide.

In 2011, former Falcons safety Ray Easterling sued the NFL over the “deception and denial” of the science of concussions. Two years later, the NFL settled the suit for $765 million but admitted no wrongdoing. That year, the league introduced its Game Day Concussion Diagnosis and Management Protocol.

As more research continued to be published on concussions and CTE, the NFL ramped up its investment in research and announced rule changes and new measures. Independent neurologists were added to the sidelines for all NFL teams.

In 2014, Boston University said it found evidence of CTE in 76 of 79 brains of deceased former NFL players. Studies have continued to find high rates of CTE in players.

In 2018, the league’s protocol was expanded to include a third unaffiliated neurotrauma consultant to monitor game broadcasts and alert on-field consultants to possible injuries to the head, neck or spine. The league also said that if players suffer an impact seizure or show the fencing response, they are considered “no-gos,” which means they cannot return to the game.

In addition, if a player stumbles or falls to the ground, that player has to be evaluated to determine what caused the fall. If anyone during the game is evaluated for a concussion, they must undergo a second evaluation the next day.