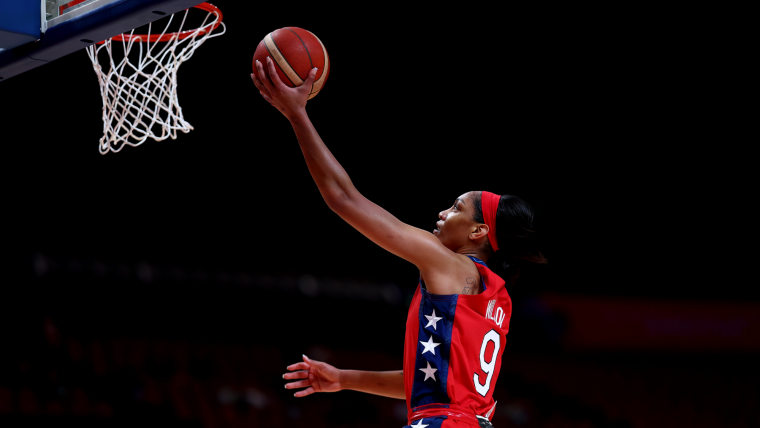 Team USA made history in their win over Korea Monday, eclipsing the record for most points in a World Cup game with 145.

Their previous record - 143 points - was set in 1990 by Brazil, but the United States was able to go one basket better as they beat Korea by 76 points in their fourth game of the World Cup.

Leading the team in scoring was Brionna Jones with 24 points, while A’Ja Wilson, Breanna Stewart, Shakira Austin, and Kelsey Plum all had at least 16.

The United States' own record was 119 points, which they set in 2006 and matched in 2014, but it was clear by the mid-fourth quarter that this would be blown out of the water, with Team USA’s offense seemingly unstoppable.


Every single American player made at least one basket in their historic win, with the USA’s bench alone enough to outscore Korea’s entire team.

MORE: Five players to watch in Sydney, including Lauren Jackson and A’ja Wilson

Not to be outdone, USA’s defense was equally impressive, with Korea the third straight opponent held to under 70 points.

The Koreans did have some bright moments, Hyejin Park their leader with 17 points on 87.5% shooting, but this was most definitely a statement game from the presumed champions, America not letting up as they scored at least 32 points in each quarter.

In their 25th straight win, the American team also set team records for most made field goals and most assists, a truly dominant performance all round.

But there is little time for celebrations and commiserations, with both teams back on the court in less than 24 hours to wrap up their Group phases, with Korea taking on Puerto Rico while the United States faces off against Bosnia and Herzegovina.

Team USA has all but cemented their spot at the top of their group, however, Korea’s clash will prove crucial, as they currently sit fourth in Group A with a 1-3 record.